Founded in 2012, and designated by Israel as a terror entity in 2021, Samidoun: Palestinian Prisoner Solidarity Network promotes the Popular Front for the Liberation of Palestine (PFLP) terrorist organization through an international network of activists.  Samidoun branches, including in Western countries, publicly support and celebrate the PFLP, its actions and its leaders; campaign for the release of jailed PFLP members; and promote anti-Israel campaigns.  Moreover, Samidoun advocates for Palestinians’ “natural right to armed resistance.”

Samidoun does not publish financial information, including funding sources and annual income. In the US, according to its website, “Samidoun Palestinian Prisoner Solidarity Network is a fiscally sponsored project of the Alliance for Global Justice, a 501(c)(3) Organization.” Samidoun is also a registered not-for-profit in Canada (since March 2021).

The February 2021 designation of Samidoun by the Israeli Ministry of Defense identifies the organization as an arm of the PFLP. A press statement accompanying the designation added that Samidoun was founded by “members of the PFLP in 2012,” and that it “plays a leading and significant role in the PFLP’s anti-Israel propaganda efforts, fundraising, and recruiting activists,” serving as a “front for the PFLP abroad.” In 2020, Germany expelled Samidoun head Khaled Barakat and imposed a four-year entry ban; his appeal was rejected, citing PFLP links and “support for a terrorist organization.” In 2022, Barakat was denied entry into the EU.

This report provides representative examples of the activities of major Samidoun chapters and key activists in Europe and North America. This includes supporting the PFLP and its members, justifying the use of violence, and incitement against the state of Israel.1

While the network operates on several continents, and has a notable presence in Iran, this document addresses Samidoun activities in Canada, France, the Netherlands, the US, Germany, and Belgium.2

Barakat has been identified as a senior PFLP member by the terror organization itself, as well as by Israeli authorities.

In September 2013, the PFLP referred to Barakat as “the “coordinator of [the] Samidoun Network,” and has labeled him a “comrade” and “commander at the PFLP” on multiple occasions.3

In June 2012, Barakat, Kates, and several other activists met with senior PFLP officials in Gaza, including Deputy Secretary-General Jamil Mezhar. During the meeting, the PFLP provided Barakat with an award, and Kates expressed her appreciation “to the PFLP and the comrades hosted the delegation.”

The February 2021 Ministry of Defense statement identifies Barakat as the head of Samidoun and “part of the leadership of PFLP abroad.” Furthermore, it accuses him of involvement “with establishing militant cells and motivating terrorist activity in Judea & Samaria (West Bank) and abroad.”

Barakat lived in Germany from 2016 to 2019, but his application for extension of the resident permit was rejected, and a four-year entry ban was imposed, “owing specifically to what the German Interior Ministry called Barakat’s proclivity for violent, antisemitic rhetoric.” In March 2022, the Berlin Administrative Court (VG Berlin), rejected his appeal, finding that Barakat is at least close to the PFLP,” and that he “repeatedly participated in activities of the PFLP in Germany and/or appeared publicly under the PFLP label.” The court further described Barakat’s “support for a terrorist organization is a case of endangering public safety according to the definition in Section 54 (1) no. 2 of the Residence Act,” and “The connection between the plaintiff’s position on the PFLP…and his statements on the armed resistance refutes the…claim that the plaintiff only identifies with individual humanitarian/political goals of the PFLP.” In October 2022, Samidoun reported that Barakat was denied entry in the EU, possibly related to the German ban.

Barakat on “resistance,” terrorists, and acts of violence 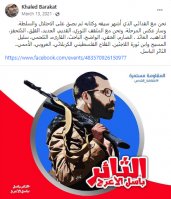 Barakat hailed the terrorist Basel Al-A’raj on several occasions, referring to him as a “commando fighter,” “revolutionary,” and a “hero.”

Barakat on the PFLP 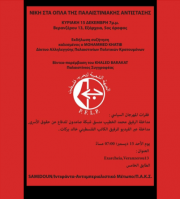 Samidoun has identified Charlotte Kates (who, as noted, is married to Barakat) as a key activist and coordinator since at least August 2014. Kates is listed as a “director” of Samidoun in Canada, (with Thomas Hofland and Joe Catron – see below).

Celebrating PFLP and other terrorists 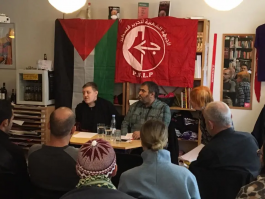 Kates and Barakat speaking in front of a PFLP flag. Kates openly expressed support for prisoners who represent “Palestinian resistance in all of its forms.”

Samidoun lists chapters in Ottawa, Toronto, and Vancouver.  According to an April 28, 2022 National Post article, senior PFLP member Khaled Barakat and his wife, Charlotte Kates, identified as Samidoun’s international coordinator, have resided in and operated out of Vancouver for a number of years. According to the article, since the start of the 2000s, Barakat “has lived in Canada off and on” and Kates has lived there since the 2010s. 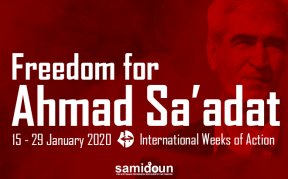 According to the PFLP, in March 2019, the Coup Pour Coup 31 association dissolved after being active for 10 years, and re-formed as the Collectif Palestine Vaincra (CPV), Samidoun’s chapter in France.4

CPV ties to the PFLP

CPV lists the PFLP as a partner, as well as several Palestinian NGOs designated by Israel as terrorist entities in October 2021 over their ties to the PFLP.

On June 29, 2020, the PFLP stated that Ahmad Sa’adat “congratulated CPV members for the support and assistant to the Palestinian cause and their rights.”

PayPal and the French government act

In June 2020, the online payment platform Paypal closed CPV’s account “because of its links with the Popular Front for the Liberation of Palestine (PFLP), a terrorist organization placed on the official lists of the Union Europe and the United States.”

On March 9, 2022, France’s Minister of Interior Gérald Darmanin announced  CPV’s dissolution because the group “calls for hatred, violence and discrimination.” On April 29, 2022 the French State Council announced the suspension of the decree of dissolution, pending an appeal by the NGO.

At least since December 2021, Martin has held the role of CPV spokesperson. An April 25, 2022 article on Le Monde called Martin “the main leader of the Collectif Palestine Vaincra.” Martin has been a member of CPV at least since January 2020.

Support for the PFLP 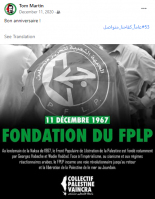 Martin congratulated the PFLP on the anniversary of its foundation

Nicolas Berry has been member of Collectif Palestine Vaincra at least since August 2019. As of April 2022, Berry was described by the French Conseil d’État, the French administrative supreme court, as a representative of CPV.

Supporting the PFLP, its members, and allies 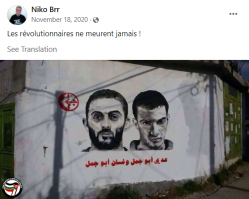 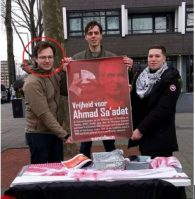 Hofland (circled in red) calling for the release of Ahmad Sa’adat.

Leaders in the Netherlands

Thomas Hofland has held the role of coordinator of Samidoun Netherlands at least since May 2021.5 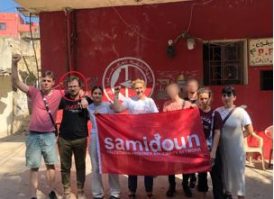 Hofland (circled in red) visiting the offices of the PFLP in Lebanon. 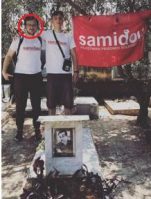 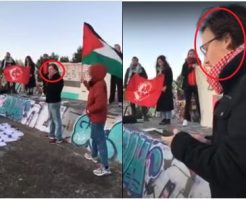 Hofland (circled in red) speaking in a pro-Palestinian protest, next to protests raising the PFLP’ flag

Hofland at the pro-Palestinian protest stating, “We say loud and clear that Israel has no right to exist not a millimeter.”

Yasmin Ahmed has been a member of Samidoun Netherlands at least since July 2020.6

Supporting and Cooperating with the PFLP

Ahmed (circled in red) speaking in a pro-Palestinian protest, next to protests raising the PFLP’ flag.

Ahmed (circled in red) disseminating official PFLP material, “The Strategy for the Liberation of Palestine” booklet and calling for the release of PFLP terrorist George Abdallah.

Ahmed with PFLP terrorist Rasmea Odeh, who was referred by Ahmed as a “sheroe.”

De-Legitimizing Israel and Embracing the Use of Violence

Leaders in the United States

Supporting the Use of Violence 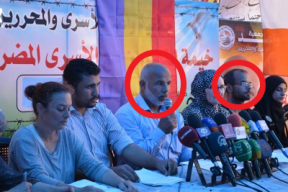 Laila Boutros has held the role of coordinator of Samidoun New York and New Jersey8 at least since December 2021.

Samidoun Deutchland has been active at least since January 2021.9 As noted above, Khaled Barakat lived in Germany in 2016-2019. In 2020, he was denied an extension of his residency permit based on his links to the PFLP.

Charleroi pour la Palestine, Samidoun’s chapter in Belgium,10 has been active since at least January 2010.11 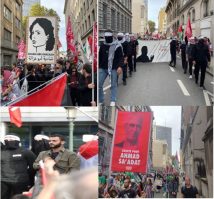 On March 9, 2022, France’s Minister of Interior Gérald Darmanin announced the dissolution of Collectif Palestine Vaincra (CPV), an anti-Zionist group linked to the EU-designated Popular Front for the Liberation of Palestine (PFLP) terror group.

Summary of the PFLP’s NGO Network

NGO Monitor has identified a network of 13 NGOs linked to the Popular Front for the Liberation of Palestine (PFLP) terror organization and funded by European, and in some cases, other governmental frameworks.