On January 20, 2010, NGO Monitor filed suit against the European Commission (EC) in order to obtain vital information related to EC funding of non-governmental organizations (NGOs). After initially rejecting NGO Monitor’s request one year ago, citing unspecified “security” factors, the EC provided a disk of documents with most details deleted (Example). 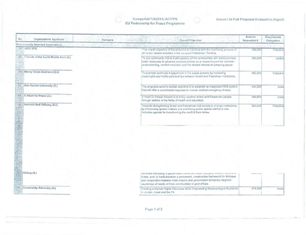 Since June 2005, this executive arm of the European Union (EU) has allocated more than €32 million to more than 100 NGOs based in Israel and the Palestinian Authority. Its allocation process has no transparency regarding decision-making or evaluation procedures. Many of the politicized NGOs funded by the EU are active in the strategy of demonization, seeking to isolate Israel using tactics such as “lawfare” and boycott campaigns.

In response to previous requests and to the current lawsuit, EC officials alleged that they had “provided Prof. Steinberg with comprehensive information on the funding of projects in Israel and in the region,” and that “the EU backs projects, not organizations, and information is readily available.” NGO Monitor’s submission to the European Court of Justice in Luxembourg demonstrates that these claims are invalid, and that the absence of transparency and independent oversight for NGO funding violates the EC’s own rules.