On May 12, 2011, NGO Monitor published a detailed and fully documented report on Coalition of Women for Peace (CWP), a leader of the BDS (boycotts, divestment, and sanctions) movement, which identified funding from the New Israel Fund (NIF), as well as European governments and other sources.

After a year of denials and equivocating on the funding relationship between NIF and CWP, accompanied by coarse incivility and slanderous attacks on NGO Monitor’s credibility, NIF responded by issuing a statement on May 15, declaring that “CWP is no longer on the list of approved donor-advised organizations” and that “We have asked CWP to remove our name and funding direction from their website.” The dates of these actions and CWP’s responses were not provided by NIF, which has funded CWP’s activities since at least 2006.

Even after NIF’s public statement, the websites of CWP and its BDS project “Who Profits” continued to list NIF as the channel for tax-exempt donations in the U.S., UK, and Switzerland, providing a seal of approval for CWP’s BDS campaigns. While CWP removed NIF’s information from its website after one week, the “Who Profits” divestment website was only changed on May 30, 2011.

In April 2010, when NGO Monitor reported that NIF was funding CWP in opposition to its stated policies on BDS, representatives of NIF tweeted numerous other baseless claims in an attempt to evade responsibility: 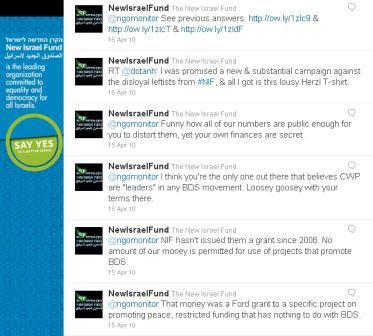 In these statements, we note that, beyond the slanders and incivility: