The May 2021 Gaza conflict was accompanied by intense NGO political advocacy campaigns under the banners of human rights and international law. As in many previous instances1, and following the demonization strategy associated with the 2001 Durban NGO Forum, these campaigns promoted one-sided narratives based on false claims, distortions and unsubstantiated allegations. In many instances, the NGO accusations, statements, and social media posts were cited and echoed by prominent media platforms, and repeated by politicians, government and UN officials. In addition to the standard allegations of war crimes, mass killing, and similar violations, this particular campaign was marked by the orchestrated inclusion of labels such as Israeli racism and apartheid, reflecting the NGO campaign initiated months before the Gaza violence.

“Israeli forces have displayed a shocking disregard for the lives of Palestinian civilians by carrying out a number of airstrikes targeting residential buildings in some cases killing entire families – including children – and causing wanton destruction to civilian property, in attacks that may amount to war crimes or crimes against humanity.” (May 17)

“The international community must also press Israel to address root causes of the latest flare up in violence which include longstanding impunity for war crimes and other serious violations of international law as well as Israel’s ongoing illegal settlement expansion, the blockade of Gaza, and the forcible eviction and dispossession of Palestinians such as those in Sheikh Jarrah.” (May 12)

“Call it what it is: for decades, Israeli authorities have imposed systematic and discriminatory repression in the Occupied Territory, including unrelenting land grabs, regular home demolitions, unchecked expansion of illegal settlements, and deliberate confinement of many Palestinians to under-resourced and overpopulated enclaves, in pursuit of a policy to maintain the domination of one racial group over another. That’s apartheid and persecution, and these are crimes against humanity.” (May 27)

“Israeli authorities have no incentive to exercise restraint or dismantle the structures of apartheid and persecution as long as they know that their Western enablers will do what they can to shield them from meaningful consequences.” (May 27) 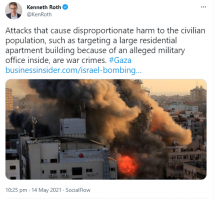 “Inherent in its settler-colonial and apartheid regime, Israel’s policy of fragmentation, dispossession, demographic manipulation, and population transfer to evict Palestinians and replace them with Israelis, continues to be carried out with impunity. This repeating cycle of violence is a result of the protracted impunity granted to Israel for its violations of international humanitarian law and international human rights laws, which we fear will escalate further and repeat itself in case of de-escalation, should there never be consequences for committing violations of international law.” (May 26)

“Adalah welcomes the decision of the United Nations’ Human Rights Council (HRC) … to open an ongoing commission of inquiry (COI) that will examine, in-depth, the human rights violations committed by the State of Israel against Palestinians on both sides of the Green Line. The mass killing of a civilian population in Gaza…” (May 27)

“[Prime Minister] Netanyahu is once again demonstrating that the rule of law has no value as far as Palestinians are concerned – whether they live in Israel, in the West Bank, in East Jerusalem, or in the Gaza Strip. The recent killing of Palestinian civilians – including 30 children – in their homes in Gaza, has now been added to the list of war crimes that must be investigated by the International Criminal Court. Netanyahu has insisted, by virtue of tonight’s statement, that he most certainly must be one of the ICC’s primary suspects.” (May 16)

“As a ceasefire announces the end of open hostilities, Israel has to take responsibility for its numerous violations amounting to war crimes and crimes against humanity.” (May 23)

“Israel has again committed war crimes in the Gaza Strip. These crimes must be properly investigated and the persons responsible punished accordingly. This is crucial not only in order to achieve justice for the victims and their families, but in order to ensure that a similar policy, with such an intolerable price, is not implemented again.” (May 24)

“The range of measures the Israeli regime employs to ensure Jewish supremacy throughout the area is inherently violent. Airstrikes, shooting and stun grenades are visible, while the laws, military orders, bureaucrats, policy makers and judges who uphold the system remain mostly invisible. ‘Restoring order’ means that Jews will go back to their peaceful lives, while Palestinians continue to live under a boot: subjected to constant, relentless violence that is invisible to Jews.” (May 14) 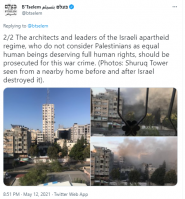 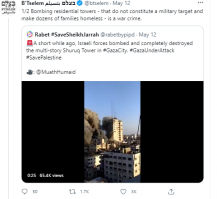 “PCHR strongly condemns IOF’s use of mass explosive power against civilians and their property and emphasizes that its use on houses and densely populated areas without any warning proves Israel’s intention to inflect harm on Palestinian civilians in disregard for International Humanitarian Law (IHL) principles of distinction and proportionality through killing and massacring entire families.” (May 16)

“PCHR’s investigations indicate that IOF has effectively classified civilians as legitimate military targets, in violation of IHL principles. PCHR renews its warning that civilians are paying the heaviest price during the escalation and emphasizes that IOF’s ongoing strikes on residential populated areas and the use of weapons based on collective retaliation constitute grave breaches of the four Geneva Conventions of 1949 that amount to war crimes.” (May 16)

“For decades, Palestinians have lived under Israeli control in its various forms – including aspects of apartheid and colonialism – in Gaza, the West Bank, and Israel. This reality, in which both Israeli and Palestinian societies are part of an oppressive segregation regime with incitement coming from the highest ranks, has led a boiling point and to a loss of faith in the possibility of a truly equal and safe shared future…. Unfortunately, the short-sightedness and deliberately destructive policies of Israeli decision-makers have brought about the escalation we are currently in the midst of, and the suffering that has been inflicted on both peoples.” (May 12)