On August 2, 2018, a number of UN and European government officials attended an event that included a virulently antisemitic artwork display in the Area C encampment of Khan al-Ahmar.1 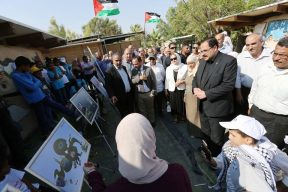 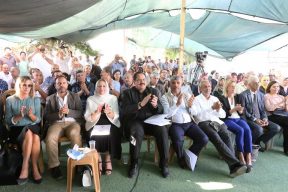 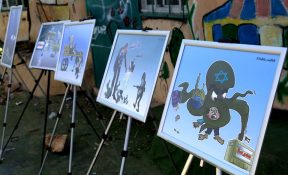 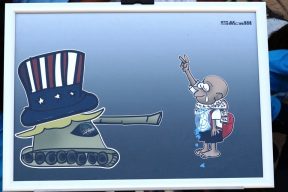 The event was hosted by the PA’s “Colonization and Wall Resistance Commission.”

None of the UN or government officials walked out or expressed their protest about such overt antisemitism.

On September 7, 2018, Makor Rishon published an article exposing the event and its attendees. The article includes the following statement from UNICEF:

“Ms. Boutin visited Khan al-Ahmar many times and expressed her concern about the right to security and equality in education for 170 children aged 6-15 from this village and the environment in which they study. Ms. Boutin was invited to a concert held by children from the village at the invitation of the Minister of Education. However, before entering the concert in the village, Ms. Boutin was asked instead to accompany the inauguration of an art exhibition which she was not aware of before her arrival. Ms. Boutin’s impression was that the art exhibition was shocking and very inappropriate, especially because this exhibition was presented in close proximity to the school, and children should be protected from violence and not exposed to violent representatives or messages that promote hatred and intolerance” (emphasis added).

The failure of the government and UN officials to vigorously and publically condemn this incident stands in sharp contrast to claimed human rights agendas.