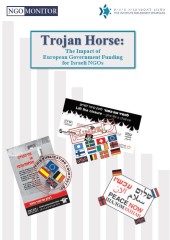 Written in Hebrew, Trojan Horse: The Impact of European Government Funding for Israeli NGOs is a detailed analysis of major funding provided by foreign governments, primarily in Europe, for highly politicized Israeli NGOs. The report was published in conjunction with the Institute for Zionist Strategies, and is the basis for a conference held in the Knesset on December 1, 2009.

Non-governmental organizations (NGOs) wield very significant political and legal power in Israel, particularly through their use of the language and frameworks of human rights and humanitarian assistance to the Palestinians. These NGOs are also a major and often hidden channel for external influence in Israeli foreign and security policies.

Much of the funding for political lobbies that claim to be based in Israeli “civil society” comes from foreign sources – particularly European governments, including the European Commission – as well as foundations such as the New Israel Fund, the Ford Foundation, and the Open Society Institute. By using the generous resources made available by these external donors, the Israel-based NGO network is able to promote particular political ideologies, and to oppose the policies of the democratically elected government on many issues.

The NGOs discussed in this analysis are highly active and visible participants in both the international and national debates on issues such as the status and future of Jerusalem, the disputed territories in the West Bank, and the actions of the Israeli Defense Forces (IDF). These NGOs issue high-profile statements and reports, generate media publicity, organize demonstrations, speak to student groups and army units, and use the courts to advance their political agendas.

In the international arena, the same NGOs submit statements to United Nations frameworks such as the Human Rights Council, run major media campaigns, and spearhead lawsuits in various countries. Using the tens of millions of shekels, euros, and dollars they receive each year, the externally funded NGO network is far more powerful than other Israeli organizations that do not enjoy similar support from foreign governments.

For example, as this report demonstrates, foreign-funded local NGOs are responsible for a significant portion of the petitions brought before the Israeli High Court of Justice. Citizens, residents, and even non-residents have standing to litigate in the Supreme Court, without having to provide evidence of potential or actual injury. Thus an individual or an organization that opposes a policy, law, or administrative action can initiate legal proceedings, even if the individual or organization is not directly affected by it. Furthermore, Israeli courts play a central role in public policy making, particularly with respect to the Israeli-Palestinian conflict, thereby amplifying the impact of NGOs that operate in this arena.

Israeli courts have become a central arena for engaging contentious social and political issues, with major advantages for groups that have the resources to devote to this activity. Extensive support from European governments and private foundations gives political and opposition NGOs based in Israel the ability to carry the costs of numerous petitions and filings. This external financing allows these NGOs to become “repeat players” in the Israeli legal process, and thus to exert significant influence on policy formation.

As a democratic country with an open and pluralistic political system and facing a largely hostile external environment, Israeli society is particularly vulnerable to manipulation by externally funded NGOs. Outside political influence of this kind resonates throughout civil society. This hidden foreign intervention infringes on the sovereignty and independence of Israel by unbalancing the political process, and interfering with the policies of the elected government and the mainstream Zionist majority.

Internationally, these foreign-funded Israeli NGOs are highly visible in their opposition to the policies of the elected government and other civil society perspectives. Through frequent submissions to and appearances at the United Nations, together with their access to diplomatic and media frameworks, these NGOs have become very influential. A significant factor is their Israeli identities, which provides these NGOs with credibility and the façade of authenticity to their causes. A number of Israeli political NGOs funded by European governments maintain offices and an active presence in Washington, D.C., New York, London, Brussels, and other cities.

This study provides a detailed analysis of the activities of more than twenty Israel-based NGOs that receive funding from European governments. We examine the political agendas of these groups and the way that they influence Israeli policy making and public debate, including their intensive use of the legal system. This report also addresses the lack of transparency and accountability, known as the “democracy deficit,” that characterizes many politicized civil society organizations.

For example, B’Tselem received 27% of its 8 million NIS budget for 2007 from foreign governments, as well as substantial income from externally-based funds. While these sources are listed on their donor page, this significant government involvement is obscured in their official statement: “B’Tselem is independent and is funded by contributions from foundations in Europe and North America.” This NGO “acts primarily to change Israeli policy in the Occupied Territories,” a political objective bolstered by B’Tselem’s office in Washington, D.C., which brings their agenda directly to U.S. officials. While widely considered Israel’s premier human rights organization, B’Tselem has faced serious criticism for its misrepresentations of international law, inaccurate research, skewed statistics (including casualty lists), and selective attention to violations against Israelis. These problematic methodologies reinforce the Palestinian narrative of victimization and portray Israel as the sole impediment to peace.

Adalah is centrally involved in attempts to vilify and criminalize Israel, including in UN frameworks. The NGO helped prepare a pseudo-academic publication, which falsely labeled Israeli self-defense measures as “inhumane act[s] of apartheid…perpetrated in the context of an institutionalized regime of systematic oppression and domination by one racial group over another.” Adalah’s policy activism in Israel includes a proposed “Democratic Constitution,” which would radically alter the laws of Israel, eliminating Jewish state-symbols and limiting Jewish immigration to “humanitarian” needs. These activities are backed by a 5 million NIS budget (in 2007), 22% of which came from foreign governments.

Similarly, Ir Amim, with a 2007 budget of 4 million NIS, promotes Palestinian claims to Jerusalem. Their maps mark houses in the Jewish Quarter of the Old City, as well as the neighborhoods of Gilo, Ramot and Pisgat Ze’ev, as settlements. While officially engaged in universal “legal advocacy aimed at halting or mitigating unilateral actions that harm the fabric of life in Jerusalem,” their legal efforts target only Jewish housing initiatives. Ir Amim received 67% of its 2007 budget from foreign government sources.

These NGOs and others examined in this report support the policies and interests of their funders, thereby distorting Israeli political and social discourse, and the internal debates on critical issues. Crucial discussions and policy decisions concerning peace negotiations, settlements, security, responses to terror, the status of Palestinians who immigrate to Israel by marrying Israeli-Arabs, and numerous other major issues are subject to hidden external pressure. At the same time, political NGOs use European funding to oppose and campaign against the policies of Israel’s democratic elected government around the world.

Based on this analysis, we argue that the Israeli government has an urgent obligation to address the implications of such massive and unique foreign funding for political NGOs. The principle of free speech must be preserved, together with limiting the ability of foreign governments to both manipulate domestic politics and to undermine Israel’s international legitimacy.

The first step in this process is to ensure transparency in the transfer of foreign governmental funds to NGOs. We recommend that Israeli government officials give high priority to discussions with their European counterparts on ending the secrecy which characterizes government funding decisions for political NGOs, and establishing clear principles for any continued support of these lobbies. In addition, NGOs in Israel that receive funding from foreign governments should be required to state this in any of the activities, publications, and advertisements that they undertake.