On July 4, 2021, the French group Collectif Palestine Vaincra (CPV) reported that it had raised €6,000 for a Palestinian PFLP-linked organization, “The Child of the Martyr Ghassan Kanafani.”1 According to CPV, the purpose of the funds was to “fund several vacation camps for tens of children from the Gaza strip.”

CPV is itself linked to the PFLP terror group through its membership in the terror-designated Samidoun Prisoner Network, which is closely associated with the PFLP. Its website, Twitter handle, and Facebook accounts appear on the Israel National Bureau for Counter Terror Financing (NBCTF)’s lists of “Terrorists Organizations and Unauthorized Associations.”

CPV published several pictures of a summer camp closing ceremony (that was held June 30, 2021) that it had supported. One photo features children holding a CPV banner and signs reading, “the children of the families of the martyrs thank the Collectif Palestine Vaincra and all those people in solidarity with us” (see picture below). 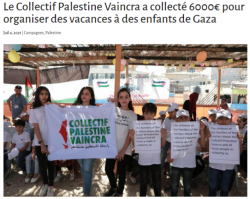 According to Palestinian media accounts, the camp was facilitated with the cooperation of the PFLP. In a video published by the terror group’s media office, children can be seen alongside PFLP paraphernalia and parading with fake guns and rockets. Notably, diplomas distributed to the participants bore the PFLP logo. Additionally, several PFLP leaders attended the ceremony, including two senior members of the newly terror-designated NGO the Union of Palestinian Women’s Committees (UPWC):

During the ceremony, Maher Mazhar, a senior PFLP official, stated:

“…on this occasion, I send you congratulations from Head of Gaza Command Branch and Political Bureau member comrade Jamil Mazhar, and from all the [PFLP Gaza] branch’s leaders…to this camp…Congratulations to these children who are the hope of the future, they are the ones who we are counting on, they are the ones who represent a blessing for us in the coming days and years in order to complete the path of struggle and combat. Great salutations for all the activists who worked hard to equip and prepare the young boy so that he will be capable to continue contributing and fighting, especially since this camp is only few days after the end of the Sword of Jerusalem operation…this camp was brought forth to benefit the preparation, building and equipping [of child soldiers]…founded on self-sacrifice and contribution…in the goal that we will have a rising generation, a generation that can carry the weapon and confront the occupation…a generation that believes in sacrifice on the path of the martyrs commanders, [Former PFLP Secretary General] Abu Ali Mustafa, [PFLP Spokesman and Political Bureau member] Ghassan [Kanafani], [PFLP leader and orchestrator of the 1976 Entebbe Hijacking] Wadie [Haddad], Abu Amar, [Former Hamas Leader] Ahmed Yasin…These kind of camps include young boys and girls in the goal of implanting concepts of combat and struggle, founded on resistance, steadfastness, confrontation, self-sacrifice and martyrdom…”

CPV is a member of the terror-designated Samidoun Palestinian Prisoner Solidarity Network (Samidoun), which according to Israel’s Ministry of Defense “acts on the PFLP’s behalf abroad” and “plays a leading and significant role in the PFLP’s anti-Israel propaganda efforts, fundraising, and recruiting activists. These activities compliment the armed and violent terrorist struggle that the PFLP engages in against Israel.” Israel’s Samidoun terror designation order also lists CPV’s website, Twitter handle, and Facebook account. Additionally, CPV lists the PFLP terror group as a partner on its website.

Due to the strong links between CPV and the PFLP, and because of the risk of terror financing, NGO Monitor called on the French government  in (March 2021 and in September 2021) to disband CPV. To date, no response has been provided by France.