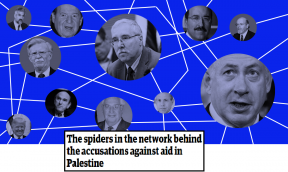 In response to NGO Monitor’s research on government funding for civil society organizations, OmVärlden, an online magazine owned by the Swedish International Development Cooperation Agency (SIDA, the branch of the government responsible for international development aid), published today twelve (!) articles making numerous false accusations about NGO Monitor. The articles, wholly inappropriate for a government agency consist almost entirely of innuendo, factual inaccuracies, and, most alarming, antisemitic motifs reminiscent of the Protocols of the Elders of Zion (spider web, conspiracy theories). The absurdity of the “evidence” for this conspiracy theory reflects the desperation of the actors involved.

These claims are accompanied by statements by activists from Israeli, Palestinian, and Swedish NGOs (including Breaking the Silence, B’Tselem, Al-Haq, Hamoked, and Palestinian Solidarity Association of Sweden), all of which have received funding from the Swedish government (SIDA) and have been criticized as a result of NGO Monitor research. The two journalists behind this obsessive series also have clear ideological bias regarding Israel.

The timing of the articles’ publication in a government-owned outlet is noteworthy – nine days before Swedish elections and following a series of articles critical of Swedish aid.

The use of antisemitic imagery by OmVärlden reflects the need for an independent factual review of Sweden’s engagement in the Arab-Israeli conflict through its support to civil society and highlights the importance of NGO Monitor’s critical voice.

In addition to demanding an apology, NGO Monitor will be filing a formal complaint with the Swedish Ambassador to Israel and with relevant authorities in Sweden.

Key Issues in this Press Release