According to Belgian law, the government must approve a Joint Strategic Framework (JSF) in order to distribute foreign development assistance in different parts of the world.  The JSF documents, formulated jointly by Belgian NGOs (non-governmental organizations) that implement aid projects in a given region, outline the NGOs’ common strategy for delivering aid. They are then submitted for government approval.

The 2017-2021 JSF for Belgian aid to Palestinians “was coordinated by Broederlijk Delen in close collaboration with the JSF Palestine working group (with Oxfam Solidarity, M3M, SolSoc and APEFE),” and was approved in 2016 by the Belgian Minister of Development Cooperation.

“Mitigating the influence of pro-Israel voices”

This JSF commits its signatories to promoting a variety of anti-Israel campaigns, through advocacy and lobbying in Belgium and the EU: 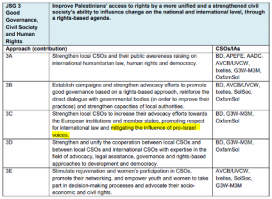 One manifestation of JSF-mandated efforts to “mitigate[ing] the influence of pro-Israel voices” occurred in the Belgian Parliament on January 22, 2020.  During a discussion of “sanctions against the colonization policy of Israel,” representatives of 11.11.11 and CNCD-11.11.11 – two Belgian NGO umbrella networks – presented  a highly politicized publication entitled “Occupation and Shrinking Space,” which makes numerous false accusations against NGO Monitor.  Broederlijk Delen, OxfamSol, and Viva Salud are all members of 11.11.11; OxfamSol and Viva Salud are members of CNCD-11.11.11.

Cooperation with the Palestinian Authority based on the JSF

Wallonie-Bruxelles International (WBI), “the agency responsible for the international relations of Wallonia and Brussels,” is funding “Justice for Palestinian Children in Conflict with the Law” (2019-2023; amount unknown). It appears that this funding is part of the implementation of the five-year international cooperation program (2019-2023) between WBI and the Palestinian Authority (PA) that focuses on child rights.

Numerous individuals with alleged ties to the PFLP have been employed and appointed as board members at DCI-P. (Details at “Defense for Children International – Palestine’s Ties to the PFLP Terror Group.”) On June 26, 2018, UK Lawyers for Israel (UKLFI) announced that after being presented with evidence of the close ties between DCI-P and the PFLP to Citibank and Arab Bank PLC, “these banks no longer provide banking services to the terror linked NGO.” As a result, DCI-P no longer directs its supporters to make donations through these institutions. Global Giving, a US-based crowdfunding resource, also removed DCI-P from its website.

In February 2020, Belgium, which held the rotating presidency of the UN Security Council at the time, reversed its invitation of a DCI-P official to brief the Council. This follows a public information campaign highlighting the terror links of DCI-P and diplomatic protests by the Israeli government. (See “Belgium Reverses Invitation of DCI-P Official for UN Security Council Briefing – Background on Speaker and DCI-P’s PFLP Ties.

The document signed between WBI and the PA (May 2019) makes direct reference to the JSF, stating that “we align also on the 3rd Joint Strategic Goal of the Joint Strategic Framework (JSF),” and to the objective of strengthening “local CSOs [civil society organizations] to increase their advocacy efforts towards the European institutions and member states, promoting respect for international law and mitigating the influence of pro-Israel voices.”