Canada is a major supporter of aid projects, with large budgets allocated annually for international development assistance. As has been previously documented, in some cases, examination of the details suggests a lack of due diligence in the decision making and evaluation processes, including funding through the United Nations and other international frameworks.  Global Affairs Canada (GAC) funding policies are also marked by a notable lack of transparency.

For example, Canada has provided millions to NGOs linked to the Popular Front for the Liberation of Palestine (PFLP)- a Canadian designated terrorist organization. NGO Monitor has identified the Union of Agricultural Work Committees (UAWC) as a primary or secondary partner on several Canadian-government funded projects.

On October 22, 2021, the Israeli Ministry of Defense declared UAWC to be a terrorist organization due to its links to the PFLP.

In an October 2020 statement GAC stated that, “While Canadian-funded projects with experienced international and Canadian partner organizations have included UAWC as a sub-implementer in the past, we do not currently fund the organization, directly or indirectly.”

However, according to information provided by GAC in October 2021 in response to an ATIP request, UAWC is listed as an implementing partner on an ongoing GAC-funded Food and Agriculture Organization (FAO) project that ends in March 2022.

Though GAC failed to provide allocations or describe the project timeframe, FAO documentation indicates that it corresponds to a Canadian-funded 2016-2022, $15.6 million FAO initiative.  Similarly, a 2016 UN document lists UAWC, the PA Ministry of Agriculture, and the Palestinian Hydrology Group (PHG) as implementing partners on the FAO project.  (Though the implementing partners listed by the UN are not identical to those provided by GAC, the dates and amount are identical, suggesting that the other partners were added at a later date.)

This and other examples (including direct GAC funding for a Palestinian NGO active in promoting discriminatory boycotts) also highlight the absence of a systematic GAC reporting process for international aid, with detailed information on all forms of assistance.  Full transparency is essential in preventing abuses and allowing for independent oversight.

UAWC ties to the PFLP

UAWC is identified by Fatah as an official Popular Front for the Liberation of Palestine (PFLP) “affiliate” and by a USAID-engaged audit as the “agricultural arm” of the PFLP, and one of at least 13 NGOs closely linked to the terror organization.

In 2019, two senior UAWC employees responsible for the NGO’s finances were arrested and are currently standing on trial for their membership in a PFLP terror cell that perpetrated an August 2019 bombing, murdering 17-year-old Rina Shnerb:

On October 29, following Israel’s designation of UAWC as a terror group, Israeli forces arrested the former president of UAWC’s board, Bashir al-Khairi, and former board member, Ahmed Soufan.

On several occasions, NGO Monitor communicated its concerns to GAC that Canada may still be funding UAWC through UN mechanisms. In July 2020, September 2020, and July 2021, NGO Monitor informed Canadian diplomats about the Dutch government’s July 2020 decision to freeze funding to UAWC and to launch an investigation into the NGO’s terror connections.  NGO Monitor also provided details regarding UAWC’s ties to the PFLP, and urged Canada to ensure that it was not providing funding to UAWC – either directly or indirectly.

In October 2020, GAC published talking points, on behalf of Minister of International Development Karina Gould, regarding Canadian support for UAWC.  While acknowledging past GAC funding to UAWC, the statement insists, “we do not currently fund the organization, directly or indirectly.”

It continues, “The Government of Canada does not have any active projects involving this organization; there are therefore no projects to suspend or terminate [and no plans to use UAWC as a sub-implementer at this time].”  The statement confirms that “Canadian officials are closely following the ongoing Dutch investigation into the UAWC, which focuses on two former employees of UAWC that were arrested by Israeli authorities and accused of being involved in a terrorist attack.”

The ongoing Canadian funding project through FAO is inconsistent with these declarations.

As a result of UAWC’s terror ties, a number of European governments and EU bodies have frozen funding to UAWC and launched terror finance investigations:

According to an August 2018 post on UAWC’s website, “the project aims to encourage farmers to use treated sewage water for watering their crops.”

UAWC stated, “The construction of the house gardens and introducing agricultural products was part of the empowering local communities’ project, and had received funding from the Canadian government.” The specific funding mechanism is not named.

The UAWC article includes a picture of a poster featuring the logos of GAC, Action contre la Faim (ACF), and UAWC, indicating that UAWC partnered on a GAC-funded ACF project. 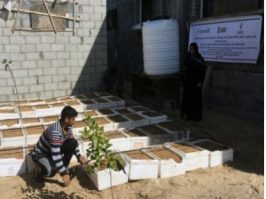 A poster featuring the logos of GAC, ACF, and UAWC regarding a 2018 project in Khan Yunis. https://uawcpal.org/news.php?n=3352&lang=3)

According to the UN’s Office for the Coordination of Humanitarian Affairs (OCHA), in 2017, Canada provided $2,569,750 for a project to be implemented with UAWC.

UAWC added, “Aid for steadfastness of vulnerable farmers, fishermen and herders in the Gaza Strip is implemented with the partnership of Oxfam and funded by Global Affairs Canada.” 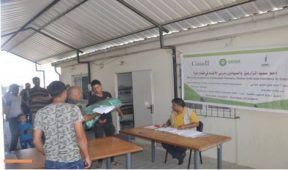 A banner at a 2018 UAWC event featuring the “Support to Vulnerable Farmers, Fishers folk and Herders in Gaza” project. The Canadian and Oxfam logos can be seen alongside that of UAWC.

According to a May 2015 UAWC Facebook post, the project “targeted herders… scattered in all of Gaza Strip’s districts as part of its efforts to raise small farmers’ standard of living and strengthen their steadfastness.”

UAWC stated that “the project is funded by the Canadian International Development Agency (CIDA), in partnership with Oxfam Italy, and implemented by UAWC.”

According to a January 2015 UAWC post, “The project aims to improve sustainable livings for those most affected by the conflict and food insecurity in 26 localities…”

UAWC stated that the project was “funded by the Canadian International Development Agency in partnership with CARE International Foundation activities.”

The project appears to correspond to the $2,960,000 “Improving Food Security for Vulnerable Palestinians” 2014-2015 project with CARE Canada listed on the Global Affairs Canada database.

A 2016 UN Food Security Cluster document lists UAWC as one of multiple partners on this Canadian-funded $9,183,833 project.