Founded in 1999, PalVision “arose as a response to an urgent need for Palestinian youth to have an outlet through which to express themselves and their desire to build a strong and healthy Palestinian society.”

PalVision’s board members, officials, and employees have justified and glorified violence against Israeli civilians and praised individual terrorists and terrorist attacks.  Additionally, they have employed antisemitic and “anti-normalization” rhetoric in their public statements.

PalVision receives generous funding from foreign governments, including the EU, despite praise for violence and the explicit rejection of anti-terror guidelines by its executive director.

In 2019, the EU provided PalVision and the Palestinian Academic Society for the Study of International Affairs (PASSIA) with approximately €1.2 million “to contribute to preserving the Palestinian character and cultural heritage of East Jerusalem (EJ).”  The primary strategic objective designated by the EU is “To protect Islamic and Christian Waqf religious and cultural heritage properties against Israeli violations and threats” (emphasis added). Contrived claims of Jewish and Israeli threats to the Al-Aqsa complex have long served to incite violence, including in recent years. Certain PalVision members themselves have repeated and insinuated this and similar positions.

Glorification of violence and terrorists

Pictures from the celebrations on the release of PFLP activist Khaled Al-Farraj, attended by Al-Atrash. (Source: Al-Atrash’s Facebook profile.) 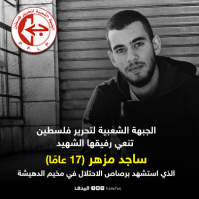 PFLP’s obituary on Mazhar’s death, taken from the website of the Hadaf online newspaper.

Waad Qannam, Secretary of the Board5

A picture posted by Secretary of the Board, Waad Qannam in solidarity with Marwan Barghouti, convicted in 2004 for the murder of five Israelis, saying: “Victory to leader Marwan Barghouti and all the heroes of our prisoner movement.”

A picture of Abu Jihad and Yasser Arafat, uploaded by Qannam.

A picture of terrorist Bahaa’ Aliyan who murdered three Israeli civilians on a Jerusalem bus, as uploaded by Issa with the title “The hero Bahaa’ Aliyan.”

Rejection of European anti-terror regulations, antisemitism and support for BDS

Daibis also works as a third secretary at the Palestinian Foreign Ministry.14

EU grants to NGOs in Jerusalem: “Protect the Palestinian identity of the city”

Of the 38,447 grants (as listed on the FTS) funded by the EU worldwide in 2019, the only examples dealing with “religious and cultural heritage properties” in a highly conflictual framework are embedded in the Palestinian context.