In 2018-2021, the World Bank (WB), through the International Development Association (IDA),1 funded a $17 million project titled “Gaza Emergency Cash for Work and Self-Employment Support” to provide “Gaza‘s unemployed youth with short term income support.” According to the WB, the project “will provide grants to selected NGOs to hire young people who have been unemployed for at least one year,” and will “train young people in the skills needed to become online freelancers, in turn equipping them to start their own e-businesses.”

The program is managed by an anti-peace Palestinian group, NGO Development Center (NDC – see below for more details).

The project’s financial statement lists several NGO grantees that, according to the available evidence, have links to the Popular Front for the Liberation of Palestine (PFLP), which is designated as a terror group by the US, the EU, Canada, and Israel. Additionally, the Islamic University in Gaza (IUG), another grantee, is reported to be “the main bastion” of Hamas in Gaza.

The NGO Development Center (NDC) claims to be a “Palestinian non-profit, non-governmental organization supporting Palestinian NGOs and their representative entities to more effectively respond to the needs of the most disadvantaged groups in Palestinian society.”The  evidence demonstrates that the NDC is highly politicized, promoting discriminatory BDS campaigns, rejecting normalization with Israel, and similar agendas.

The Red Crescent Society for Gaza Strip (RCS4GS) presents itself as “a developmental NGO that seeks to contribute to improving the health, educational, cultural and social conditions of the community through comprehensive quality programs based on justice and equality.”

RCS4GS regularly hosts events organized by the PFLP. For instance, in February 2019, RCS4GS hosted a memorial service organized by the PFLP for Maher Yamani, a PFLP “founder” and a “member of the Central Committee and one of its most prominent military commanders.” Yamani “coordinated special operations…in particular the operation against an aircraft of the Israeli company El Al in July 1968 in Greece.” “Fighters” of the PFLP’s Abu Ali Mustapha Brigades and “civil society representatives” attended the event (see photo below). 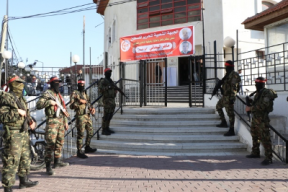 On May 15, 2018, Ahmad Abdallah Aladini, a Ma’an Development Center employee, was killed in clashes on the Gaza border. According to the terror group, Aladini was a“member of the leadership of the PFLP in Deir al Balah,” a town in Gaza. 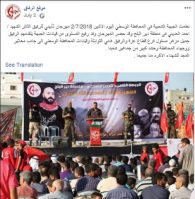 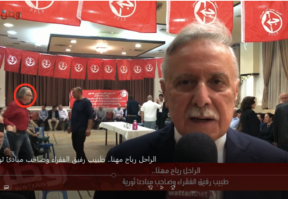 In May 2017, the Women’s Affairs Technical Committee (WATC) inaugurated a youth center for girls in the town of Burqa, near Nablus. As reported by Palestinian Media Watch, the center was named after Dalal Mughrabi, a terrorist who in 1978 murdered 37 civilians, including 12 children.

Funding for this building was provided by Norway, UN Women (United Nations Entity for Gender Equality and the Empowerment of Women), and the Palestinian Authority Ministry of Local Government.  Upon learning that the center had been named after a terrorist, the Norwegian government and the United Nations issued strong condemnations. Norwegian Minister of Foreign Affairs Børge Brende stated that “We have asked for the logo of the Norwegian representation office to be removed from the building immediately, and for the funding that has been allocated to the centre to be repaid.”

In the April 2020 edition of its “Voice of Women” magazine, WATC published an interview with the wife of the late Palestinian terrorist Khalil al-Wazir (Abu Jihad).  Abu Jihad was responsible for the 1978 “Coastal Road Massacre” in which 38 Israeli civilians were murdered, including 13 children.

During the interview, WATC refers to Abu Jihad as “one of the leaders of the Palestinian revolution, whose last words were ‘no voice rises above the intifada.‘” (Emphasis added.)

The Islamic University in Gaza (IUG) is referred as “the main bastion of Hamas in the Gaza Strip” by the Palestinian newspaper Al-Hayat Al-Jadidah. A Chronicle of Higher Education article from December 29, 2008, further noted that IUG “was established by the founder of Hamas, Sheikh Ahmed Yassin, and has emerged as a training ground for the political and spiritual leadership of Hamas.”

Similarly, a Washington Institute policy paper from August 24, 2007 cites numerous examples that show ties between Hamas and IUG. For instance, during the 1990s, a member of the Izz Al-Din Al-Qassam brigades named it as one of “our institutions,” while PLO official Ziad Abu Amer referred to IUG as a “principal Muslim Brotherhood stronghold.”

On March 28, 2017, the IUG organized a conference on “Leaders who served Jerusalem and Palestine,” which featured prominent Hamas leader Mahmoud Al-Zahar as a guest speaker, as can be seen in the picture below (center). 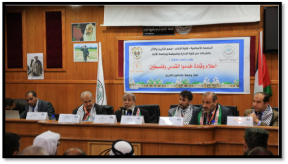 An IUG-organized event featuring Hamas leaders (2017). Note also the picture of Hamas founder Sheikh Ahmed Yasin on the wall of the IUG convention center, above the speakers. Source: IUG website.