One of the main principles of Switzerland’s foreign policy is its “permanent neutrality,” which dictates that Switzerland should not play an active role or take sides in armed or political conflicts between other nations. The Swiss Federal Department of Foreign Affairs (FDFA), describes this policy as a “source of peace and stability in Europe and beyond.”

When it comes to Israel, however, Swiss policy is far from neutral. And its claim to promote peace through fringe NGOs that manipulate Israeli public opinion has no justification or supporting evidence.

According to its own records, the FDFA is funding several non-governmental organizations (NGOs) that actively call for the end of Israel as a Jewish state, demand that Israel be labeled an apartheid state, and/or lobby for Israeli leaders to be tried at the International Criminal Court (ICC). And within Israel, Switzerland lends its support to an NGO that seeks to “break” Israeli “myths” about its creation and reinforces the Palestinian narrative – through a project ostensibly rooted in transparency that the Swiss government itself cynically violates.

A number of these same NGOs are linked to the Popular Front for the Liberation of Palestine (PFLP), designated as a terrorist organization by the EU, the US, Canada, and Israel.  Swiss-funded NGOs include:

Most notably, in 2021 B’Tselem launched a high-visibility international campaign that employs antisemitic rhetoric and labels Jewish self-determination as inherently racist.

Switzerland is also funding an Israeli NGO that is justified through the façade of “peacebuilding” and “human rights.” However, the contract between the government and the NGO, obtained by NGO Monitor, specifically focuses on “myth-breaking” and dismantling the founding narratives of Israel.

Since 2018, Switzerland has provided Akevot with CHF 500,000. According to the contract (parts of which were released through a Freedom of Information request), Swiss funding goes to researching Israeli government archives to uncover documentation of “fraught and little-known events and mechanisms that problematize or even contradict ‘the official story’ of the Israeli-Palestinian conflict.” Akevot exposes the “Jewish-Israeli Public” to what it sees as the “root causes of the Israeli-Palestinian conflict” and pushes them to “recognize Israel’s responsibility for historical injustices.” A major component is a partnership with the left-leaning Haaretz newspaper, which regularly publishes articles based on and/or by Akevot reports.

A review of the materials published by Akevot shows that each and every “event” or “mechanism” involves allegations of Israeli wrongdoing during the 1948 War of Independence and the early years of the state. For example, “massacres of Palestinians in 1948” and “historical documents [that] reveal[] suspicions that Haganah soldiers committed murder, torture, theft and looting during the War of Independence.”

Akevot also presents documents that it claims show “a clear picture…the security authorities were a tool in the hands of those in the government who espoused a policy of segregation and of subordinating Palestinian society to Jewish society” and that “Jewish fighters’ actions were the major cause of Arab displacement, not calls from Arab leadership.” In other words, repetition and amplification of the Palestinian narrative of 1948, and an attempt to reject and refute Israeli perspectives.

According to a summary of the project deposited with the Swiss government, if Israeli authorities refuse to give Akevot access to certain documents, Swiss funds will be used to “fight these denials through the legal channels… This most frequently means filing appeals but can require high court petitions.”

Thus, in blatant violation of democratic norms, the Swiss government’s policy consists of manipulation through funding of an Israeli political NGO.

While the examination of government archives is an interesting and potentially worthwhile academic project, the aims of this grant are expressly political – as seen above. NGO Monitor is not aware of any other government project or funding that revolves around identifying sensitive material in the archives of another democracy, with the stated purpose of specifically targeting an religious/ethnic group in order to change foundational national narratives and to alter ideologies solely on one side of a conflict. As a matter of course, there is no Palestinian parallel to Akevot, and Switzerland is not supporting efforts to uncover evidence of atrocities committed against Jews in Palestinian and other Arab archives.

Ironically, while paying Akevot CHF 500,000 to force open highly selective Israeli government documents, the Swiss have been censoring details of its funding for Akevot. In response to a Freedom of Information (FOI) inquiry from a Swiss citizen, the government refused to provide essential aspects regarding the Akevot project, deeming it too sensitive to be released to the Israeli and Swiss public. This censored information includes specifics regarding Akevot’s activity budget and, more worryingly, details regarding NGO partnerships. In the FOI response, the Swiss government blacked out multiple paragraphs that describe how the Akevot project “aligns” with other NGO activity funded by Switzerland. 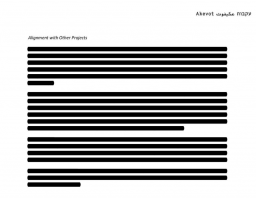 In the framework of Israeli democracy, citizens are entitled to pursue their private research and political agendas. However, the use of proxies by foreign governments in order to manipulate public opinion and impose their policies is entirely inconsistent with democratic practice.

If Swiss officials value transparency, they might begin by opening up their archives covering the 1940s.