Ties to Ecumenical Accompaniment Programme in Palestine and Israel (EAPPI)

Funding and Support of WATC 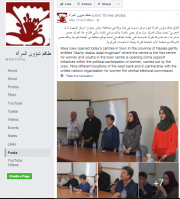 Diakonia does not publish amounts it grants to NGOs, reflecting a lack of transparency and accountability. 2018-2021 figures based on NGO annual reports, 2018-2019 figures based on quarterly reports submitted to the Israeli Registrar for Non-Profits.

All Articles about Diakonia