Click Here to Read the Response sent to NGO Monitor by Maciej Popowoski, Deputy Director-General in the Directorate General for Neighbourhood and Enlargement Negotiations of the European Commission

During a May 19, 2020 meeting of the European Parliament Committee on Foreign Affairs (AFET), Commissioner for Neighborhood and Enlargement Olivér Várhelyi stated that he had instructed the heads of EU delegations to Israel and West Bank/ Gaza to “look deep” in to the allegations that some EU funds go to terror-linked or -supporting NGOs, declaring that such funding “will not be tolerated.”1 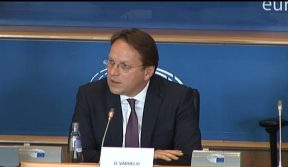 Olivér Várhelyi, Commissioner for Neighbourhood and Enlargement, addresses issue of EU funding to Palestinian NGOs that could be linked to terror groups

This follows concerns raised by Members of the European Parliament and civil society over a “clarification letter regarding the EU-funded contracts” sent on March 30, 2020 by the EU Representative Office to the West Bank and Gaza to Palestinian NGO Network (PNGO) – an umbrella organization of 135 Palestinian NGOs. In it, the EU diplomats appear to   give in to Palestinian pressure and effectively annul EU regulations that prohibit the transfer of EU funds to terror groups or individuals connected to these groups (what Palestinian NGOs label “political parties” and “resistance factions”). After the letter was made public in Israeli media, the EU Ambassador to Israel was summoned for a demarche at the Israeli Ministry of Foreign Affairs.

At least five members of PNGO have reported ties to EU-designated terror organizations, including through employees and/or board members who are directly involved in the activities and programs – on top of the various Palestinian NGOs and humanitarian groups that are affiliated with the PFLP. In addition to ongoing funding, on April 9 the EU announced a massive assistance package to the PA of “around €71 million in response to the coronavirus pandemic,” including  “€6.9 million in humanitarian aid” to unnamed “non-governmental organisations and UN agencies already present on the ground in the West Bank and Gaza Strip.”

In practice, this means that even if a Palestinian NGO applying for EU grants is an affiliate of terrorist groups or employs individuals from these groups, the EU will still provide them with taxpayer funding – whether designated for emergency responses to COVID-19 or for regular programs.

In 2019, the EU introduced a requirement in its contracts with NGOs, under “General conditions applicable to European Union-financed grant contracts for external actions” (Annex G.2, Annex II, Article 1.5 bis). It stipulates that “Grant beneficiaries and contractors must ensure that there is no detection of subcontractors, natural persons, including participants to workshops and/or trainings and recipients of financial support to third parties, in the lists of EU restrictive measures.” In the Palestinian context, these lists EU-designated terrorist organizations (e.g.  Hamas, Izzedine al-Qassam Brigades, Al-Aqsa Martyrs Brigade, Islamic Jihad, and the Popular Front for the Liberation of Palestine).

According to media reports, during a December 2019 meeting with EU officials, representatives from PNGO “refused to sign an EU grant request which stipulates among its criteria that beneficiaries must refuse to transfer any EU aid given to terrorist groups or entities….The organizations in question steadfastly decline to do so, claiming Palestinian terrorist groups are merely ‘political parties.’” According to the European Legal Support Center (ELSC),2 a Netherlands-based initiative of PNGO and Rights Forum, then Acting EU Representative in Ramallah Tomas Niklasson told PNGO, “Given that there is no individual Palestinian included in the EU (anti-terror) list; the obligation not to transfer funds to any of the seven Palestinian organisations currently on the list does not create any additional obligation for civil society organisations (beyond their obligations under domestic legislation) and that there is no obligation or expectation from the EU’s side that we would discriminate against a person based on political affiliation.”

Far from being reassured by Niklasson, on December 30, 2019, multiple Palestinian NGOs, including PNGO members, launched a “Palestinian National Campaign to Reject Conditional Funding.” The campaign, which rejects the EC’s “conditioned funding” and “so-called anti-terrorism clauses and policies…on preventing terrorism that affect the history and struggle of our people” (emphasis added), justifies the use of violence and claims that the “Palestinian resistance factions are not terrorist organizations,” (see video clip).

In addition, it appears that on January 20, 2020, during a meeting between officials from Palestinian NGOs and EU representatives in Brussels, EU’s appeasement message was reiterated. According to ELSC, Palestine Desk Officer of the European External Action Service Paloma Portela and Francesca Pessina from the European Commission’s Department for International Cooperation and Development (DEVCO)  told the NGO executives that “the [anti-terror] clause did not impose new nor different obligations on EU beneficiaries in Palestine.”

In parallel to the intimidation and lobbying campaign by Palestinian NGOs and the PA,3 ELSC  published a memo (March 3,2020) analyzing the anti-terror clause and assessing, like the EU representatives, that “the inclusion of this clause will not have any tangible effect on Palestinian Civil Society Organizations” (emphasis in original).

The March 30 communication stresses that “it is understood that a natural person affiliated to, sympathizing with, or supporting any of the groups or entities mentioned in the EU restrictive lists is not excluded from benefitting from EU-funded activities, unless his/her exact name and surname (confirming his/her identity) corresponds to any of the natural persons on the EU restrictive lists” (emphasis added). Moreover, the letter notes, “As far as Palestine is concerned, there are no Palestinian natural persons on the restrictive measures list, pursuant to Council Regulation 2580/2001.”

In other words, even if the Palestinian NGOs applying for EU grants is an affiliate of EU-designated terrorist groups (as a number are) or employs individuals from these groups, the EU will still provide them with taxpayer funding.

The EU also emphasizes that “the EU does not ask any civil society organization to change its political position towards any Palestinian faction or to discriminate against any natural person based on his/her political affiliation.”

PNGO enjoys generous funding from the European Union (EU)4 and other international donors for the stated purpose of strengthening, coordinating, and networking among Palestinian civil society. PNGO also enjoys permanent representation in the UN’s Humanitarian Country Team, which coordinates all international aid in Gaza and the West Bank. This comes with a seat on the advisory board of the UN’s humanitarian pooled fund, which is designated for emergencies, granting PNGO decision-making power in selecting the fund’s beneficiaries.

On March 30, 2020, the EU Representative Office to the West Bank and Gaza sent a “clarification letter regarding the EU-funded contracts” to Palestinian NGO Network (PNGO) appearing to give in to Palestinian pressure and effectively annul EU regulations that prohibit the transfer of EU funds to terror groups or individuals connected to these groups.

On April 30, NGO Monitor sent a letter to the President of the European Commission regarding the EU anti-terror clause.