On February 2, 2017, diplomats from the Netherlands Representative Office in Ramallah met with senior officials from a Palestinian NGO, Union of Agricultural Work Committees (UAWC), to sign an $11.5 million grant agreement. The Dutch contingent was led by its “Head of Cooperation,” Henny de Vries.

UAWC is closely linked to the Popular Front for the Liberation of Palestine (PFLP), designated as a terrorist organization by the US, EU, Israel, and Canada. The NGO is listed by Fatah as a PFLP “affiliate” and a USAID-engaged audit refers to it as an arm of the terror group.

As seen in a picture posted on the Representative Office’s Facebook page, UAWC representatives to the signing ceremony included individuals currently standing trial or incarcerated due to their involvement in PFLP activities, as well as another official associated with jailed PFLP leader, Ahmed Sa’adat.

On July 20, the Dutch government announced it was freezing funding to UAWC over its close links to the terror group.  Foreign Minister Stef Blok and Development Minister Sigrid Kaag revealed that an internal government audit concluded that Dutch funds were used to pay the salaries of two UAWC employees- Samer Arbid and Abdel Razeq Farraj- currently standing trial for their alleged role in an August 26, 2019 bombing that murdered an Israeli civilian.

As described below, Farraj was present at the signing ceremony with Dutch officials.

UAWC representatives at the signing 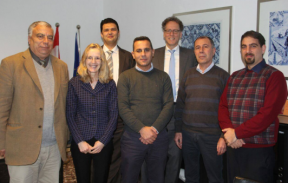 As a direct result of NGO Monitor research, the Dutch government is halting €8 million in funding, over three years, to the Palestinian NGO known as “UAWC.” The Dutch announced that it will also conduct an external investigation into UAWC’s ties to the PFLP terror group.

On December 19, 2019, the Israel Security Agency (Shabak) announced it had uncovered a 50-person terror network, operated in the West Bank by the Popular Front for the Liberation of Palestine (PFLP) – a designated terrorist organization in the EU, the US, Canada, and Israel. The statement named several leading PFLP figures, several of whom currently or previously worked for European funded, PFLP-linked non-governmental organizations (NGOs).