Abdel Shafi Community Health Association (ACHA), formerly known as the Red Crescent Society for the Gaza Strip (RCS4GS)1, was founded in 1972 and “is a developmental NGO that seeks to contribute to improving the health, educational, cultural and social conditions of the community through comprehensive quality programs based on justice and equality.”

ACHA was founded and is directed by senior members of the Popular Front for the Liberation of Palestine (PFLP), a designated terrorist organization by the US, EU, Canada, and Israel. Other employees have demonstrated support for Palestinian terror groups and their actions. On multiple occasions, ACHA facilities were used by the PFLP to hold their formal events.

ACHA founder Haider Abdel Shafi was a member of the Arab Nationalist Movement, which was headed by PFLP founder George Habash and whose Palestine branch was eventually transformed to the PFLP. According to the Dr. Haider Abdel Shafi Center2, Abdel Shafi was arrested for “supporting the military activities” of the PFLP, and although “he always denied membership of the PFLP,” Abdul Shafi “expressed sympathy for its radical stand.”

The PFLP has never recognized the State of Israel and opposes all negotiations with Israel, instead calling for the “liberation” of all of “historical Palestine,” regularly by means of terror.

NGO Monitor has identified a broad network of Palestinian NGOs claiming to advance human rights or humanitarian interests that have links to the PFLP terror group. These connections include current and former NGO board members, officials, and employees who served in the PFLP or spoken on its behalf at public events and taken part in PFLP forums.

ACHA’s terror affiliation is antithetical to human rights norms and principles. Due to its affiliation with the PFLP, the provision of funds to ACHA are in likely violation of international, EU, and domestic terror financing and material support laws. The organization is therefore an inappropriate partner for governments and individuals seeking to further human rights in the region.

ACHA Staff with Ties to the PFLP

According to ACHA, Younis Ahmed Al-Jaro chairs ACHA’s board of directors.3 Although reported to have resigned in 2013 from his leadership role in the PFLP, Al-Jaro has continued to participate in multiple PFLP events and was called by the terrorist group “a great [Popular] Front man comrade” in 2014.

According to ACHA, Bakr Hussein Abu Safiya is a member of the ACHA’s board of directors.5

Abu Safiya appeared on the PFLP list for the scheduled May 2021 Palestinian Legislative Elections, which were postponed indefinitely. According to the PFLP, Abu Safiya is “a member of the PFLP’s central committee.” As of August 2020, Abu Safiya held the role consultant surgeon at UHWC’s Al-Awda hospital. 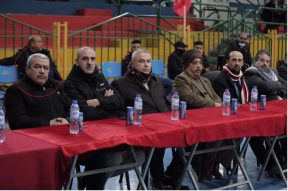 Abu Safiya hailed the PFLP’s assassination of Israeli Minister of Tourism Rehavam Ze’evi and called for carry out similar attacks: “…Abu Ali Mustafa Brigades carried out the promise of retaliation…All factions must retaliate on assassinations of commanders in the same way of the [Popular] Front…”

According to ACHA, Fayrouz Arafa is a member ACHA’s board of directors.6 According to several Arabic–language news outlets, Arafa was arrested in the 1970s due to her membership in the PFLP.

Saba participated in several PFLP events and uses his social media to demonstrate support for the PFLP, its members, and terrorists affiliated to other terror groups: 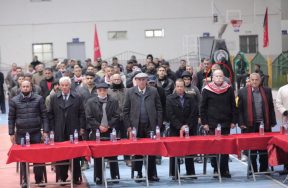 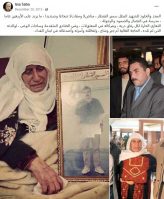 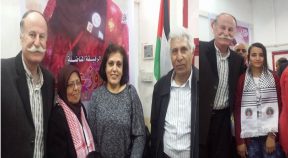 According to ACHA and Arabic-language sources, Rami Murad has served on ACHA’s board of directors at least since August 2021.8 In 2012–2013, Murad was a member of the “PFLP’s youth group,” the Progressive Student Labor Front (PSLF), and was referred to as a “comrade.”

According to several Arabic-language sources, in 1999–2018, Mona El-Farra held a seat on ACHA board of directors. El-Farra was also the board’s deputy chair in at least 2012–2016. According to Arab media outlets, Mona El-Farra is “a founding member of UHWC.” According to MECA, El-Farra is currently MECA’s Director of Gaza Projects.9 El-Farra uses social media to demonstrate her support in the PFLP. 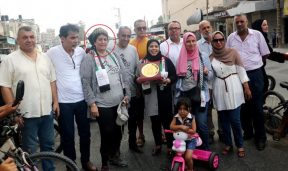 According to ACHA, Hatem Abu Al-Qaraya is ACHA’s executive director.10 Abu Al-Qaraya uses social media to demonstrate his support for the PFLP: 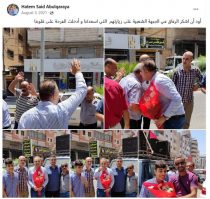 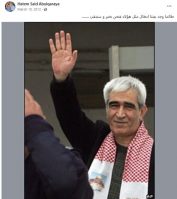 According to ACHA, Hatem Abu Shaban has served as a board member of ACHA since 2013.11 Abu Shaban openly supports terrorists and their actions on social media. 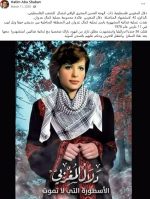 Abu Shaban shared a poster of the terrorist Dalal Al-Mugrabi and hailed her as “the beautiful shining elegant face of the Palestinian people’s struggle.” (Source: https://www.facebook.com/hatim.a.shaban/posts/10219127198863898)

According to ACHA and Arabic-language sources, Hatem Abu Shaban has served as a board member of ACHA since April 2013.12 Abu Shanab is a member of Central Committee of the Palestinian People’s Party (PPP). Abu Shanab has participated in a PFLP official event and attended meetings with PFLP senior members. 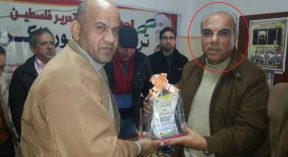 According to ACHA, until his death in February 2022, Suleiman Shahin was a member of ACHA’s board of directors since at least since August 2021.13 According to UHWC, Shahin was “one of the union’s founders” and chaired its board in 2017–2019. UHWC is identified by Fatah as an official PFLP “affiliate” and by a 1993 USAID-engaged audit as the “the PFLP’s health organization.” For more information on UHWC’s PFLP ties, read NGO Monitor’s report “Union of Health Work Committees’ Ties to the PFLP Terror Group.”