On April 9, 2015, Al-Mezan, a non-governmental organization (NGO) linked to the PFLP, hosted a conference in Gaza about the opportunities for prosecuting Israelis presented by Palestinian ascendancy to the International Criminal Court (ICC).  The event featured representatives from Palestinian terrorist organizations – Hamas, Islamic Jihad, and Popular Front for the Liberation of Palestine (PFLP) –as well as officials from leading NGOs and the UN.

This event – sponsored by the UN Development Programme (UNDP)1 – highlights the alliance and confluence of interests between terrorist actors and supposed “human rights defenders” in exploiting the ICC for anti-Israel agendas.

Since 2000, Palestinian NGOs have sought to use foreign and international legal bodies as a means of taking action against Israel and prominent Israeli officials. These efforts, among others, include seeking arrest warrants from courts to arrest Israeli officials travelling to Europe. (For more information on these campaigns, see NGO Monitor’s “Lawfare, International Law, and Human Rights,” and “NGO ‘Lawfare’: Exploitation of Courts in the Arab-Israeli Conflict.”)

A central component of this political warfare campaign is to heavily lobby the ICC to open a formal investigation into Israel. The NGOs primarily responsible for this campaign are tied to terrorist organizations, including the PFLP. (For more information, see NGO Monitor’s “International Criminal Court (ICC) and NGOs” and “Terror-linked and boycott promoting NGOs behind potential ICC investigation.”)

Participants with ties to terrorist organizations

According to Al-Mezan, the conference dedicated a panel to “The Vision of the Palestinian Factions,” featuring Hamas’ Khalil Al-Hayya, Islamic Jihad’s Khaled Al-Batsh, and the PFLP’s Saleh Nasser. Al-Mezan’s description of the session included these organizational affiliations.

A separate panel was moderated by Al-Mezan Board Member Nafiz Al-Madhoun. Madhoun serves as Director General of the Hamas-controlled Palestinian Legislative Council. 2

A number of Arabic-language sources have referred to Al-Madhoun as a Hamas leader, or the head of Hamas’ parliamentary bloc in Gaza.  Palestinian government sources have also noted his co-hosting of a September 2011 event for Gaza security personnel with Hamas spokesman, Sami Abu Zuhri.

Al-Haq Director Shawan Jabarin participated remotely in Al-Madhoun’s panel. Jabarin has been linked to the PFLP, as affirmed by the Israeli Supreme Court in 2007, 2008 and 2009 rulings. In May 2019, he appeared at a PFLP-sponsored event alongside several other NGO officials.

Jamil Sarhan of the Gaza-based Independent Commission for Human Rights (ICHR) also spoke at the conference. Sarhan, now serving as Al-Mezan’s treasurer,5 was cited by Palestinian media reports in 2007 and 2009 as being a member of the PFLP central committee.

Notably, Adalah Director General Hassan Jabareen also took part remotely. Advancing the notion that the ICC must prosecute Israelis because of a lack of will on the part of the Israeli judiciary, Jabareen claimed, “The Israeli courts rejected all the cases that were submitted to open a criminal investigation into the alleged war crimes committed by the army, and the bottom line is that Israeli law does not give any legal treatment to the Palestinians.”

According to Al-Mezan’s 2015 annual report, it received funding from UNDP to carry out a series of activities, including holding a “Conference on the International Criminal Court in Gaza” and publishing “awareness and promotion materials on accountability and the ICC.”

UNDP’s Ibrahim Abu Shamallah participated in the conference’s opening panel, asserting that “The decision to join the ICC is important and strengthens the trend to use the mechanisms and tools of international justice in the framework of supporting the Palestinian people’s access to justice and pushing for a real peace that achieves Palestinian national hopes. Justice is needed for Palestine and the Palestinian people more than ever, and the international community cannot continue to bury their heads in the sand.” 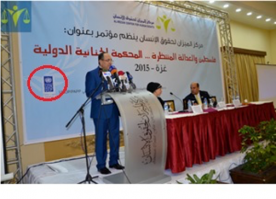 Al-Mezan claims that it seeks to advance human rights. However, its officials and employees include members of the PFLP and Hamas. Additionally, Al-Mezan officials and board members often speak at PFLP events, and many have posted material on their social media accounts promoting terror groups or utilizing antisemitic imagery and rhetoric.