According to its website, “Al Mezan Center for Human Rights is an independent, non-partisan, non-governmental human rights organization based in the Gaza Strip” that “envision[s] a free and sovereign Palestinian society where all women, men and children enjoy the benefits of social justice, human rights, the merit of the rule of law, and good governance, fully and equally.”

Al Mezan is highly active in anti-Israel lawfare campaigns and has made attempts to secure arrest warrants for Israeli officials for alleged “war crimes.” Al Mezan has submitted numerous documents to the International Criminal Court (ICC) requesting the investigation and prosecution of Israeli officials. During the 2014 Gaza War, Al Mezan provided UN-OCHA with casualty statistics that identified combatants and members of terror groups killed during the conflict as “civilians.”

Al-Mezan claims that it seeks to advance human rights. However, its officials and employees include members of the Popular Front for the Liberation of Palestine (PFLP) and Hamas – both designated as terrorist organizations by the US and the EU.  Additionally, Al-Mezan officials and board members often speak at PFLP events, and many have posted material on their social media accounts promoting terror groups or utilizing antisemitic imagery and rhetoric.

Affiliations of Al-Mezan Board Members, Officials, and Employees

Based on reports from Arabic media, as well as statements from Hamas and the PFLP, a number of Al-Mezan board members, officials, and employees appear to have direct affiliations with these terrorist groups.

Nafiz Al-Madhoun, member of the Al Mezan Board2

A number of Arabic-language sources have referred to Al-Madhoun as a Hamas leader, or the head of Hamas’ parliamentary bloc in Gaza.  Palestinian government sources have also noted his co-hosting of a September 2011 event for Gaza security personnel with Hamas spokesman, Sami Abu Zuhri.

Kamal El-Sharafi, Chairman of the Board4

El-Sharafi serves, inter alia, as Head of Al Aqsa University’s board of trustees and as advisor to the Palestinian president on Human Rights and Civil Society.5 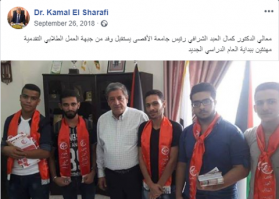 Sarhan also serves as a lawyer and as Deputy CEO of the Independent Commission for Human Rights (ICHR) in Gaza.7 He is part of the Democratic Union of Lawyers and Jurists,8 which the PFLP defines as a “PFLP union framework.”9 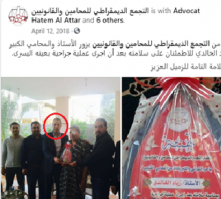 Talal Awkal, Deputy Head of the Board10

Hussein Hammad, responsible for the North Gaza District, Delegate to the Mobilization and Technical Assistance Unit13

In addition to the direct connections between Al-Mezan and its employees with terrorist organizations, several of them have posted material on their social media accounts glorifying terror attacks and groups and utilizing antisemitic rhetoric and imagery.  These transgressions alone should disqualify them from enjoying foreign government support and from engaging with the UN, the International Criminal Court (ICC), and other international bodies.

Mohammed Abdullah, Head of the Rafah branch of Al-Mezan15

According to his Facebook page, Abdullah has worked at Al-Mezan since 2000.

Hussein Hammad (see above for his PFLP-awarded prize).

On December 11, 2018, Ahmad posted a picture of himself with a PFLP flag, adding: “The revolution is strong as steel… red as embers… steadfast as an oak… deep as our brutal love for the nation” – Che Guevara. Happy anniversary to my brothers and comrades, long live our resistance and we will remain in the pledge of the martyrs.” 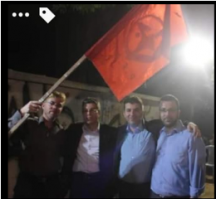 On October 17, 2017, when the PFLP commemorated its 2001 assassination of Israeli Tourism Minister Rehavam Ze’evi, Ahmed posted a picture of a man wrapped in a PFLP flag with the caption: “The poor are wrapped in their homeland and do not know the meaning of submission. On October 17 the muffler resonated (a common PFLP term alluding to the murder of Ze’evi). I salute the resistance. Good morning, brothers, and comrades, a morning of pride and dignity.” 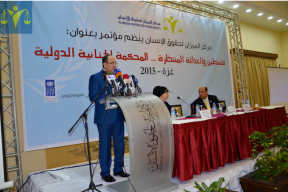 Head of Al-Mezan’s board, Kamal El-Sharafi, with PFLP delegations and members: 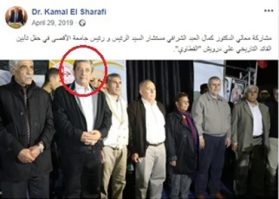 In this picture, El-Sharafi can be seen against the background of Darwish’s picture and the PFLP logo. (Source: El-Sharafi’s Facebook profile.) 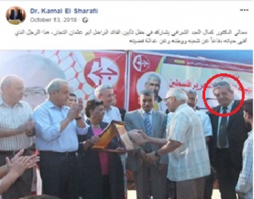 In the picture posted on his Facebook page, Sharafi can be seen on the background of the PFLP logo and pictures of Najjar and PFLP secretary general, Ahmad Saadat (first on the right). Sharafi added on his Facebook page: “This man gave his life in defense of his people and country and the justice of his cause.” (Source: El-Sharafi’s Facebook profile.) 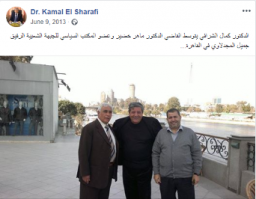 El-Sharafi with member of the PFLP Political Bureau, Jameel Al-Majdalawi in Cairo, referring to him as “a comrade.” (Source: El-Sharahi’s Facebook profile.) 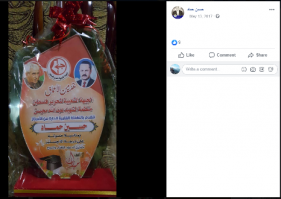 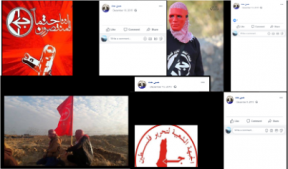 Examples of the many photos identifying with the PFLP, posted as a series by Hammad. (December 13, 2015) (Source: Hammad’s Facebook profile.) 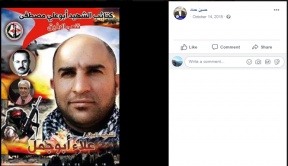