Click here to read the PDF version of the report. 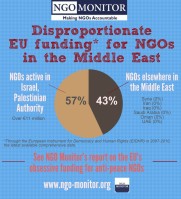 NGO Monitor has systematically documented the European Union’s large-scale funding of political advocacy non-governmental organizations (NGOs) and the role played by many of these NGOs in the Arab-Israeli conflict. As demonstrated, these activities and overall agendas do not advance the stated objectives of promoting democracy and human rights, and are often incompatible with promoting EU ideals and principles.1

This report provides a detailed analysis of funding from the European Instrument for Democracy and Human Rights (EIDHR), which distributes more financial support to NGOs active in the Arab-Israeli conflict than to projects in any other country or part of the world. The analysis examines the uniquely large-scale and non-transparent nature of this funding, noting that decision making processes, as well as comprehensive data on funding after 2010, remain hidden from public scrutiny.

Our analysis points to the need for a wide-ranging public debate, including hearings in the European Parliament, to facilitate policies that will end the secrecy with which EIDHR and other frameworks allocate political NGO funding. There is also a need for transparent, independent, and professional evaluation of EU allocations to NGOs, and direct engagement with the Israeli government and Members of Knesset to establish agreed guidelines on the appropriate uses of taxpayer funds.

The European Commission disburses hundreds of millions of euros annually via aid frameworks to provide financial assistance to developing countries and promote EU principles abroad. One of the EU’s major financial assistance programs is the European Instrument for Democracy and Human Rights (EIDHR). With an approximate annual budget of €160 million, program objectives are to provide “support for the promotion of democracy and human rights in non-EU countries.”

Through EIDHR, EU funding is allocated to projects conducted by EU-selected NGOs and institutions. These projects revolve around EIDHR’s 10 focal themes: torture; democracy – rule of law; fighting impunity; economic, social and cultural rights; fundamental rights protection; gender women’s rights; human rights education capacity building; racism; discrimination; and children’s rights. The latest available comprehensive data on EIDHR worldwide funding is a compendium detailing all projects initiated in 2007-2010. The lack of recent data and evaluations regarding a central EU funding mechanism is, in itself, inconsistent with the requirements for good governance and democratic oversight.

This report presents a comparative analysis of 2007-2010 EIDHR funding in the context of the Arab-Israeli conflict, as directed to Israel and the “OPT” in relation to other beneficiary countries. The report also provides research into the activities of the organizations that receive EIDHR funding.

The Global Scheme, involves a broad set of goals (such as opposing torture), in which NGOs receive support to implement a program directed at multiple countries and tailored to the specific circumstances of each.

The Country Scheme targets a specific country via NGO funding in order to realize a specific and local objective. In both schemes, EU representative offices throughout the world generally select the NGO grantees.

There is also another type of EIDHR funding, unique to the Arab-Israeli conflict. Israel and the “OPT” appear jointly as the targets for nine projects ostensibly addressing local, specific issues of human rights and democracy (see Table D in the appendix)3. As will be demonstrated, this is important because eight of the nine grants are for NGOs that adopt and promote the Palestinian political narrative and engage in political warfare campaigns against Israel. 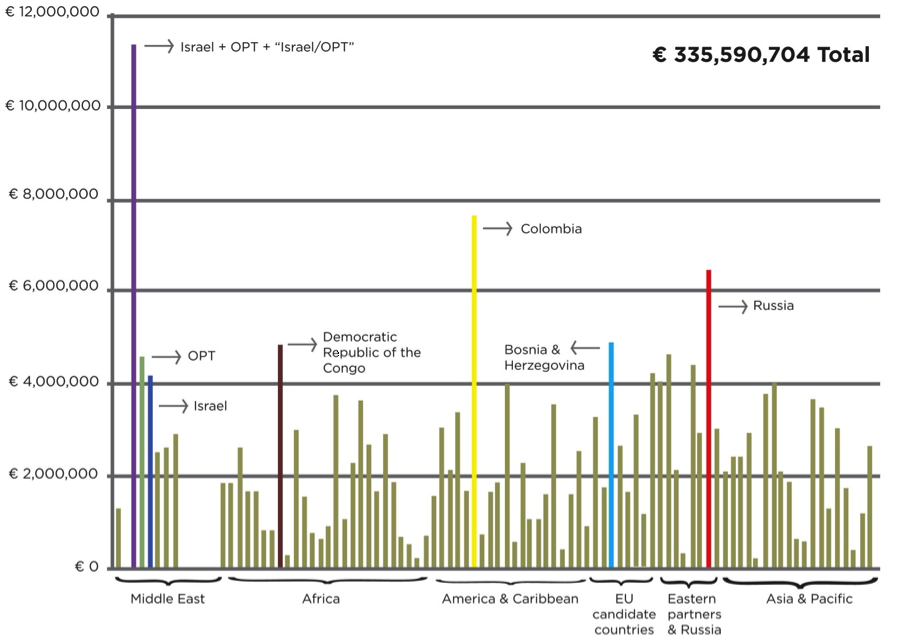 Analysis of EIDHR projects directed at Israel and “OPT”

In the following section, we analyze the funding directed to each of these three categories.  Our analysis shows that projects directed at the “OPT” dealt exclusively with local issues related to human rights and democracy. However, for projects directed at “Israel,” the objectives were more politically oriented and largely focused on the Arab-Israeli conflict; those projects not dealing with the West Bank and Gaza primarily focused on issues related to the Israeli-Arab population. Additionally, projects directed at Israel/OPT were for the large part carried out by organizations with a strong bias against Israel, as demonstrated by their political activities and agenda.

Table A: Overview of EIDHR Projects Directed at Israel and “OPT”

EIDHR Grants Directed at Israel/OPTAdditionally, many of the NGOs chosen to promote EIDHR principles of human rights and democracy in Israel and the “OPT,” in particular in the context of the conflict, are highly political organizations with a strong bias against Israel. These EU-funded organizations regularly employ “apartheid” and other demonizing rhetoric, campaign for anti-Israel boycott efforts (BDS), actively lobby international frameworks, and engage in lawfare activities. Such political agendas and activities are inconsistent with the ideals and principles of EIDHR, as well as EU foreign policy.

EIDHR Grants Directed at the “OPT”