During his visit to Israel on January 10-12, EU Commissioner for Research, Science and Innovation Carlos Moedas reaffirmed the EU’s firm stance against BDS or any boycott against Israel. He stated, “the EU and the European Commission are against boycotts and are against BDS.”

Moedas also pointed to thriving cooperation between the EU and Israel, adding that “if we enlarge the cooperation in science and innovation, I think that will be a trigger to solve other problems.”

Nonetheless, over the past five years (and before) the EU has been funding several NGOs active in BDS campaigns against Israel, such as ARIJ, PARC, Miftah, CWP, and ICAHD.

Of particular note is Grassroots Jerusalem, which “strongly supports the global BDS call as a strategic tool to hold ‘Israel’ accountable for its oppression of the Palestinian people” (quotes in original). According to theirfinancial report, the European Commission provided 28% of Grassroots Jerusalem’s funding in 2014, and an additional 33% came from the European Endowment for Democracy, a joint initiative of the EU and Member States exclusively funded by them.

Neither the direct EU grant to Grassroots Jerusalem nor the project-designated EU grant to DanChurchAid can be found on the EU’s Financial Transparency System (FTS). The European Endowment for Democracy, which is not covered by the FTS, does not provide information as to the size of its contribution. Grassroots Jerusalem’s own financial report shows limited transparency and includes no information as to the proportions of its budget or the donations, only including the following graphic, showing the NGOs breakdown of support: 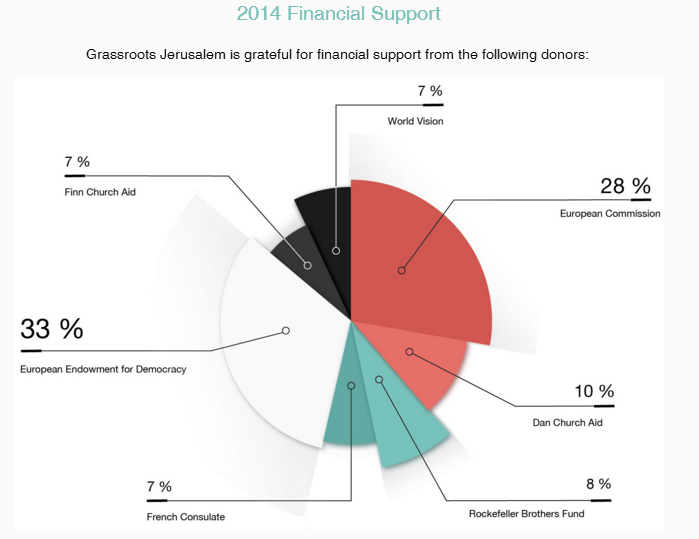