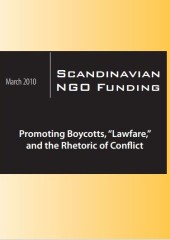 Sweden, Norway, Denmark, and Finland contribute millions of dollars annually to non-governmental organizations (NGOs) that include some of the most radical groups operating in Israel and the Palestinian Authority. The scope of funding from these countries is extensive compared to NGO support from other European governments.

NGO Monitor’s research details the levels of Scandinavian funding received by specific NGOs, as well as the anti-Israel advocacy and demonization campaigns in which these NGOs engage – often in direct contradiction to the humanitarian, peace, and human-rights agendas they claim to espouse.

Swedish Funding for NGO Rejectionism
Diakonia: An Analysis of Activities in the Arab-Israeli Conflict

Norwegian NGO Funding: Peace and Coexistence, or Boycotts and Apartheid Rhetoric?
Correspondence with Norwegian Officials on this report

Finnish Funding for NGOs: Political Warfare under the “Peace” Façade

Sweden, Norway, Denmark, and Finland – the major northern European countries comprising Scandinavia – contribute millions of dollars annually to non-governmental organizations (NGOs) that include some of the most radical groups operating in Israel and the Palestinian Authority. The scope of funding from these countries is extensive compared to NGO support from other European governments.

This NGO Monitor monograph details the levels of Scandinavian funding received by specific NGOs, as well as the specific anti-Israel advocacy and demonization campaigns in which these NGOs engage – often in direct contradiction to the humanitarian, peace, and human-rights agendas they claim to espouse.

The Swedish International Development Cooperation Agency (SIDA), Sweden’s foreign aid body, provided SEK 455 million (approximately $59 million) in 2008 to NGOs in the West Bank and Gaza. This aid is channeled through 14 Swedish “framework organizations” including Diakonia, a large Christian humanitarian NGO that uses the government funding to promote the Palestinian “right to resist” and delegitimizes Israel’s right to self-defense.

Some of the NGOs supported by Norwegian funds are involved in anti-Israel boycott campaigns and the Stop the Wall Campaign in Norway. NORAD revealed that several of the grantees stated their preference for Norwegian aid, “as most other donors have stricter and more time consuming procedures for changes of projects, and are also less prone to finance projects that can be politically sensitive.” This provides additional evidence that Norway is funding politicized groups rather than the “humanitarian aid and emergency support” organizations for which the aid money was designated.

Denmark also is a major NGO donor. Its Foreign Ministry and Embassy in Israel have provided direct funds to NGOs with overtly political agendas. DanChurchAid (DCA), a large humanitarian NGO, channels funds from the Danish government to highly politicized NGOs in Israel and the Palestinian Authority. In 2008, the Danish government provided DKK 213.9 million (approximately $41 million) to DCA.

Finland’s Foreign Ministry provides relatively smaller amounts for such NGOs, and NGO Monitor research indicates that this amount has been decreasing. However, Finland continues to support groups including HaMoked and the Public Committee Against Torture in Israel (PCATI), as well as the Jerusalem Center for Social and Economic Rights (JCSER) and the Palestinian Academic Society for the Study of International Affairs (PASSIA), whose “apartheid” rhetoric and anti-Israel agendas are inconsistent with the Finnish government’s stated goals for the Middle East.

A separate, significant channel for Scandinavian funding is the NGO Development Center (NDC), a Ramallah-based Palestinian organization that has distributed $6 million to 25 NGOs on behalf of the governments of Sweden and Denmark, as well as Switzerland and the Netherlands. In some cases, the same organizations also receive direct funding from these countries and from the European Commission.

As this report shows, many NDC recipients employ “apartheid” and “ethnic cleansing” rhetoric regarding Israel; promote “war crimes” cases and “lawfare” against Israeli government officials; and actively support the anti-Israel boycotts, divestment, and sanctions (BDS) campaign. NDC is responsible for facilitating the “Palestinian NGO Code of Conduct,” a document that demands Palestinian groups reject “any normalization activities with the occupier, neither at the political-security nor the cultural or developmental levels.”

As this monograph details, the flow of money from Sweden, Norway, Denmark, and Finland supports NGOs that pursue Palestinian political goals under the guise of “human rights” and “international law.” Demonizing Israel and fueling the conflict with the false rhetoric of “apartheid,” “ethnic cleansing,” and “massacres,” these NGOs fail to meet the Scandinavian governments’ stated goals for the region.