On August 18, 2021, the Union of Palestinian Women’s Committees and the Palestinian NGO Network (PNGO) — NGOs with links to the Popular Front for the Liberation of Palestine (PFLP) —  organized “a workshop on the role of women in the union elections” with the support of the European Union, via funding provided to the Palestinian Central Election Commission (CEC). The PFLP is an EU-designated terror group.

Samira Abd Al-Alim, a PFLP leader and a UPWC official, addressed the event.

The participation of a member of a terror group in an EU-funded activity clearly violates the European Union’s anti-terror funding requirements. 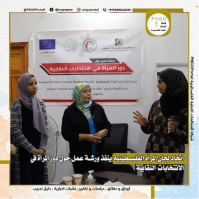 Samira Abd Al-Alim (middle) standing in front of a banner featuring the workshop funded by the European Union (Source: PNGO). 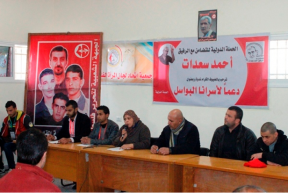 Photo of Samira Abdel-Alim on the PFLP website, taken during a symposium titled “In Support of Our Heroes,” hosted at UPWC’s Headquarters (Source: PFLP, “Solidarity Campaign with Leader Sa’adat Organizations a Symposium in Rafah entitled in ‘Support of Our Heroes,’” February 26, 2015).

The potential abuse of European Union funds by terror-linked NGOs has been widely discussed in Europe over the last two years, in particular after five senior employees, including financial directors of EU-funded Palestinian NGOs, were charged in relation to the murder of 17-year-old Rina Shnerb in August 2019.

In 2019, the EU introduced a new requirement in its contracts with Palestinian NGOs, under “General conditions applicable to European Union-financed grant contracts for external actions” (Annex G.2, Annex II, Article 1.5 bis). It stipulates that “Grant beneficiaries and contractors must ensure that there is no detection of subcontractors, natural persons, including participants to workshops and/or trainings and recipients of financial support to third parties, in the lists of EU restrictive measures.” These lists include terrorists and terrorist organizations designated as such by the EU (e.g.  Hamas, Izz ad-Din al-Qassam Brigades, Al-Aqsa Martyrs Brigade, Islamic Jihad, and the Popular Front for the Liberation of Palestine).

At a May 19, 2020 meeting of the European Parliament Committee on Foreign Affairs (AFET), Commissioner for Neighborhood and Enlargement Olivér Várhelyi stated that he had instructed the heads of EU delegations to Israel and West Bank/ Gaza to “look deep[ly]” into allegations that some EU funds go to terror-linked or terror-supporting NGOs, declaring that such funding “will not be tolerated.” To date, no public information about this internal review has been made public.

In June 2020, the Office of the President of the EU Commission emphasized in correspondence with NGO Monitor that “these [safeguards] rules make the participation of entities, individuals or groups affiliated linked or supporting terrorist organisations incompatible with any EU funding.”

In April 2021, the European Parliament approved the 2019 discharge report, “EU general budget – Commission and executive agencies.” The document clearly calls on the Commission to “thoroughly verify the use of Union funds by third entities, their affiliates, and/or natural persons to ensure that no funds are allocated or linked to any cause or form of terrorism and/or religious and political radicalisation; and to ensure that these Union funds are proactively recovered, and recipients involved are excluded from future Union funding.”

UPWC is identified by Fatah as a PFLP “affiliate” and by a USAID-engaged audit as the “PFLP’s women’s organization.” In March 2018, UPWC Vice President Suhair Khader stated that UPWC is the PFLP’s “feminist framework.” Numerous UPWC staff members and board members have ties to the PFLP. (For details, see NGO Monitor’s report “Union of Palestinian Women’s Committees’ Ties to the PFLP Terror Group.”)

NGO Monitor research also shows that multiple PNGO officials have ties to terrorist groups, and at least five PNGO members are active in EU-designated terror organizations, including through their employees and/or board members who are directly involved in activities and programs. PNGO also regularly hosts and/or participates in events with officials from Palestinian terror groups, including Hamas and PFLP. Additionally, PNGO consistently rejects anti-terror requirements mandated by donor governments. (For more information, see NGO Monitor’s report “PNGO’s Ties to Palestinian Terror Groups.”)

In 2020-2022, the EU is committing €1.5 million to the CEC for “Support to the Central Elections Commission (CEC) in strengthening the civic engagement and electoral participation of Palestinians in the West Bank and the Gaza strip.” According to the EU Financial Transparency System, this is the only ongoing EU funding to the CEC during this period.

In a January 2021 response to NGO Monitor’s inquiry about the project, the EU confirmed that “the project foresees that the Central Elections Commission may award financial support to third parties in compliance with certain criteria and conditions in order to carry out certain activities, such as electoral awareness raising” (on file).

In addition to the abovementioned UPWC workshop, another such beneficiary of the project is the PFLP-linked NGO Al-Dameer, which was granted €13,600 by the CEC in the form of “financial support to third parties” (on file), and carried out workshops in December 2020-January 2021.