The Palestinian NGO Network (PNGO) is an umbrella organization of 142 Palestinian non-governmental organizations (NGOs) working to “coordinate” the work of its member NGOs in five main sectors, “health, democracy and human rights, women and children, rehabilitation and agriculture.”

NGO Monitor research shows that multiple PNGO officials have ties to terrorist organizations, and at least five PNGO members have ties to EU-designated terror organizations, including through their employees and/or board members who are directly involved in activities and programs. PNGO also regularly hosts and/or participates in events with officials from Palestinian terror groups, including Hamas and Popular Front for the Liberation of Palestine (PFLP). Additionally, PNGO consistently rejects government donor mandated anti-terror requirements (see below).

PNGO does not publish financial information, reflecting a lack of transparency.

PNGO participates in “Partnership for democratic development in Palestine,” a project (2016-2019) of Norwegian People’s Aid (NPA). The project, funded by Norway (NOK 50.8 million), is implemented along with 10 other partners including Union of Agricultural Work Committees (UAWC), Palestinian Center for Democracy and Conflict Resolution (PCDCR), and Democracy and Workers’ Rights Center [Association] in Palestine (DWRC).

PNGO does not list its board members. It appears that this information appeared previously on PNGO’s website but has been removed.

PNGO regularly hosts events, including at its headquarters, with representatives from Palestinian terror groups, such as Hamas and the PFLP. Its officials have also spoken on panels alongside terror group members. For example: 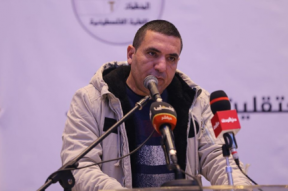 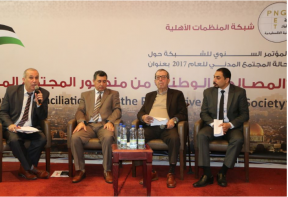 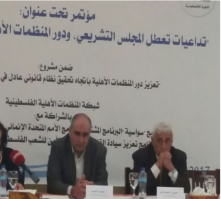 Shatha Odeh: PNGO’s head of the board3 and head of PNGO’s Coordinating Committee.4 Odeh also serves as CEO of HWC,5 an organization with ties to the PFLP (see NGO Monitor’s report).

Mohsen Abu Ramadan: PNGO’s former director in Gaza and former member of PNGO’s General Assembly. Abu Ramandan continues to write articles on PNGO’s website, including as recently as May 2020. Abu Ramadan is a member of the Palestinian Democratic Assembly, an organization that unites the PFLP and the DFLP terror groups under one umbrella. Abu Ramadan is also referred to as “member of the coordination committee for the right of return marches.”

At least five PNGO member organizations have ties to the PFLP, including Addameer, DCI-P, UHWC, UAWC, and UPWC. PNGO regularly promotes articles and activities of its terror-tied NGO members. For example: 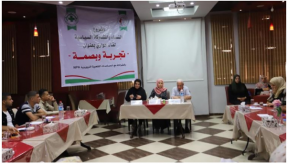 In a first, EU to investigate if funding went to terror linked NGOs

During a May 19, 2020 meeting of the European Parliament Committee on Foreign Affairs (AFET), Commissioner for Neighborhood and Enlargement Olivér Várhelyi stated that he had instructed the heads of EU delegations to Israel and West Bank/ Gaza to “look deep” in to the allegations that some EU funds go to terror-linked or -supporting NGOs, declaring that such funding “will not be tolerated.”

Initial Analysis of HRW’s Housing Report: Ignoring Facts in Service of a ’48 Agenda

On May 12, 2020, Human Rights Watch released “Israel: Discriminatory Land Policies Hem in Palestinians,” the latest installment in its decades-long campaign to assail Israel’s legitimacy.  Timed to coincide with the observance of Nakba Day (May 15) – when anti-Israel activists mourn the establishment of the Jewish State as a “catastrophe” – HRW once again invents rights while embracing a 1948 agenda.

On March 30, 2020, the EU Representative Office to the West Bank and Gaza sent a “clarification letter regarding the EU-funded contracts” to Palestinian NGO Network (PNGO) appearing to give in to Palestinian pressure and effectively annul EU regulations that prohibit the transfer of EU funds to terror groups or individuals connected to these groups.

On April 30, NGO Monitor sent a letter to the President of the European Commission regarding the EU anti-terror clause.