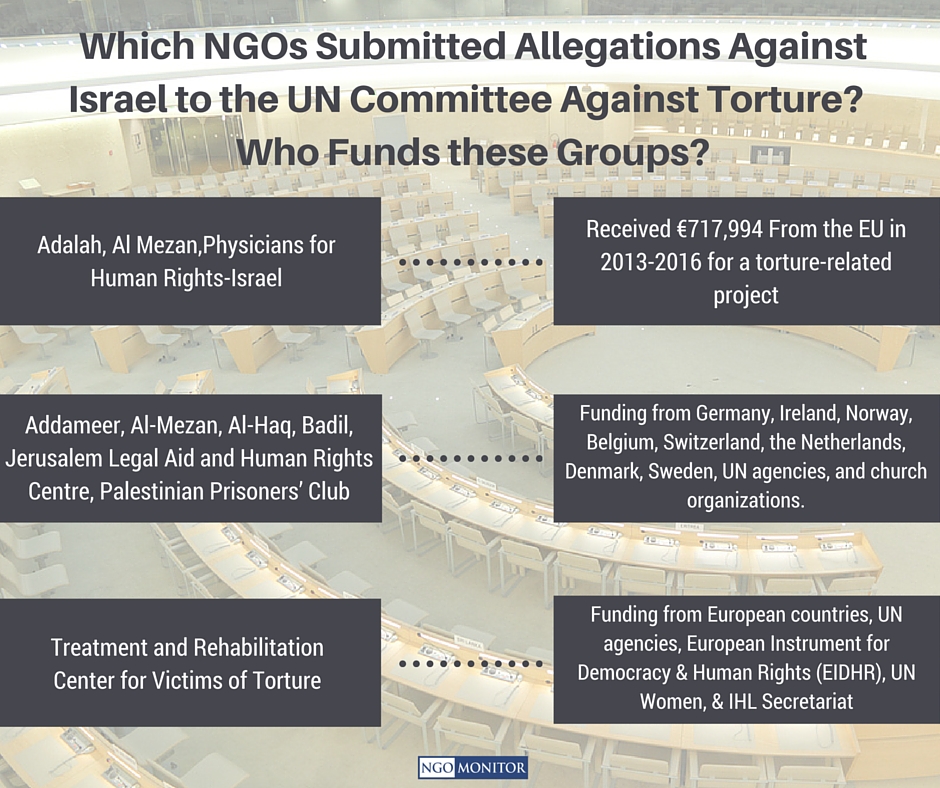 This week (beginning May 2), Israel is being reviewed by the United Nations Committee Against Torture (CAT) as part of its periodic review of country compliance with the International Convention Against Torture. Five other signatories to the convention – France, Turkey, Tunisia, Saudi Arabia and the Philippines – are also under review during this CAT session.

NGOs (non-governmental organizations) wield significant clout at the CAT. These groups submit reports on the compliance of states to the treaty, and conduct private briefings with the Committee to discuss countries’ practices. Accredited organizations may also attend the country sessions as observers and submit additional materials to the committee regarding follow-up of committee recommendations. In turn, the official UN webpage for CAT features links to the sites of several powerful NGOs, including Amnesty International, Human Rights Watch, and FIDH (France), giving these groups free advertising and credibility not offered to others.

Ahead of this session, Israel has once again become the focus of undue and disproportionate attention from a number of NGOs that have invented new standards of torture to further their political goal of demonizing and marginalizing Israel. Many of the NGOs that submit information regarding Israel are involved in anti-Israel demonization and BDS (boycotts, divestment, sanctions) campaigns. Moreover, the sheer number of NGO submissions regarding Israel (13) is greater than those submitted on such serial human rights offenders as Saudi Arabia (7), Turkey (6), Tunisia (7)and the Philippines (8), highlighting a disproportionate focus on Israel. (NGO Monitor provided its own submission, highlighting the abuse of the CAT process and offering recommendations to improve it.)

In addition, some of the groups that submitted materials to the CAT have been linked to terrorism. Shawan Jabarin is the director of Al-Haq and a member of the board of directors of Defense for Children International- Palestine Section. He has been denied exit visas by Israel and Jordan on account of his alleged ties to the Popular Front for the Liberation of Palestine (PFLP) terror organization. Similarly, Addameer Chairperson Abdullatif Ghaith was banned by Israel from travelling internationally because of his alleged membership in the PFLP.

Many of the NGOs that submitted statements on Israel are funded by the European Union, EU member states and other European countries.

For instance, Adalah, Al Mezan and Physicians for Human Rights-Israel received a grant of €717,994 from the EU (2013-2016) for the purpose of “Combating Impunity: Torture and CIDT Prevention, Accountability and Rehabilitation in Israel/ oPt.”

Additionally, the Treatment and Rehabilitation Center’s submission was funded by a number of European countries and bodies and UN agencies, including the European Instrument for Democracy and Human Rights (EIDHR), UN Women and the Human Rights and International Humanitarian Law Secretariat (IHL Secretariat)- a joint funding mechanism of Switzerland, Sweden, Denmark and the Netherlands. The IHL Secretariat is a consistent funder of anti-Israel organizations that lead demonization and BDS campaigns.

Some of the materials submitted to the CAT seek to expand the definition of torture by interpreting the treaty to include acts and policies that are not governed by it. This is frequently done through the use of Article 16 of the convention, which prohibits “cruel, inhuman or degrading treatment or punishment which do not amount to torture.” This phenomenon is exemplified by an NGO complaint against Turkey which condemned the noise emitted by Turkish weapons and armored vehicles as “a form of psychological torture.”

Additionally, while not explicitly claiming violations of the convention, some submissions address issues that are entirely divorced from the purpose of the convention. For example, a Filipino NGO submitted two reports that dealt entirely with the lack of access to information on family planning, contraceptives and abortions.

This phenomenon of expansion is taken to an extreme when it comes to Israel. A number of NGOs who submitted report to the CAT characterize Israel’s housing policy, the closure of Israel’s border crossings with Gaza, settlement policy, and many other acts as “torture” and a violation of the Convention.

NGOs that submitted statements on Israel

Excerpts from NGO statements on Israel Expanding the definition of torture

Return of bodies of terrorists

As seen above, a significant portion of the NGO reporting on Israel falls outside the scope of the Convention and appears to be included in order to manufacture additional violations by Israel. In contrast, submissions  regarding Saudi Arabia, Tunisia, Turkey and the Philippines focused on topics clearly covered by the Treaty: violations relating to imprisonment and detention such as abuse and beating of prisoners and criminal suspects at the hands of security services.

This double standard is exemplified by comparing Amnesty’s Israel submission with its document on Tunisia that details rampant sexual abuse of prisoners and suspects, and its Philippines report that discusses beatings of suspects at the hands of law enforcement bodies. No Amnesty submissions appear on the CAT website for Saudi Arabia and Turkey, despite the widespread use of torture in these countries.