The European Commission disburses hundreds of millions of euros annually via aid frameworks to provide financial assistance to developing countries and promote EU principles abroad. One of the EU’s major aid programs is the European Instrument for Democracy and Human Rights (EIDHR), a thematic funding instrument for EU external action aiming to “support projects in the area of human rights, fundamental freedoms and democracy in non-EU countries.” This instrument is “designed to support civil society to become an effective force for political reform and defence of human rights.”1

Similar to the framework for 2007-2013, EIDHR funds are distributed through four modalities:

The following visuals were generated using data from the EU’s main instrument of financial transparency – the Financial Transparency System (FTS).

Table A: Overview of EIDHR projects and funds directed at Israel and “oPt” (the EU’s designation for the West Bank and Gaza) in 2014-2017:

Of the total EIDHR budget for 2014-2020 (€1.3 billion), combined funding allocated to Israel and the “oPt” stands at approximately €20.3, or roughly 1.5% of EIDHR’s total budget. While this would suggest a minuscule amount of resources devoted to Israel and the Palestinian territories, a closer inspection reveals otherwise.

As mentioned, according to the FTS, EIDHR funds a total of 61 projects at a value of €9.3 million in Israel in 2014-2017. The following table provides a summary of the five most common themes4 in EIDHR projects and their corresponding funding.

*“Joint” refers to EIDHR projects conducted in both Israel and “oPt” 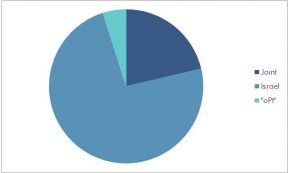 While the majority (45 of 61) of EIDHR-Israel grants are focused on activities within Israel, 28 of these 45 grants – or 62% – deal exclusively with minority groups in Israel such as Arab citizens (including Bedouins) and refugees/asylum seekers. This marks a 77% increase from the period of 2007-2010, when the number of grants dealing exclusively with minority groups in Israel stood at 35% (see graph below). 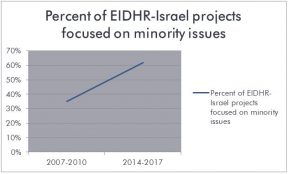 EIDHR distributes grants (also called “commitments”) to NGOs either as “sole recipients” or as “multi-recipients,” the difference being whether or not the beneficiary is the only recipient of the grant or one of several. However, reflecting a lack of transparency, in many instances where there are multi-recipients, the estimated amount received by each NGO on the commitment is listed as “N/A” (not available).

Many of the NGOs chosen by EIDHR to promote the principles of human rights and democracy, particularly in the context of the Israeli-Palestinian conflict, are highly politicized and consistently present partisan positions. Some of these EU-funded organizations have engaged in activities that stand in direct contravention to official EU policy, such as referring to Israel as an “apartheid state” and supporting lawfare and boycott efforts (BDS).5 Such politicized agendas and activities are inconsistent with the ideals and principles of EIDHR, as well as EU foreign policy.

According to the FTS, EIDHR funds 31 projects at a value of €11 million in “oPt.” The following table provides a summary of the five most common themes in EIDHR projects and their corresponding funding. 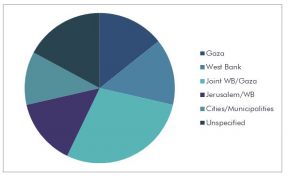 As opposed to Israel, EIDHR projects focused at “oPt” appear to be more in line with EIDHR’s objectives regarding democracy and human rights. However, a point of interest is that grants meant to support and expand civil society in “oPt” only amounted to 8.72% (€960,313), an allocated amount that is less than both “Environmental Concerns” and “Support to Vulnerable Groups,” such as the disabled.

Graph C: EIDHR-oPt grants to organizations in support of BDS and/or linked to PFLP 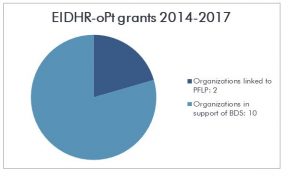 Ten recipient organizations of EIDHR funds for 2014-2017, receiving a combined €5.9 million, were found to promote BDS, while two additional organizations with reported ties to the PFLP terror organization receiving grants amounting to €1.5 million. It should be noted that exact amounts to these beneficiary organizations (whose activities stand in direct contravention to EU policy) cannot be established due to a lack of transparency in the FTS.

EIDHR in the Middle East

Graph D: Percentage of EIDHR projects in the Middle East per country 2014-2017: 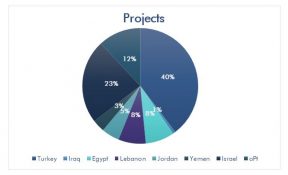 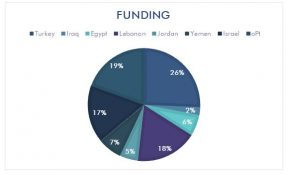 Taken together, the focus of the EIDHR on Israel and the Palestinian Territories becomes apparent with Israel/”oPt” accounting for a total of 35% of all projects and an astonishing 36% of all funding. This places Israel/”oPt” second in projects (behind a staggering 103 for Turkey) and first in funding (with second place Turkey coming in 10% – or €5,649,346 – behind). 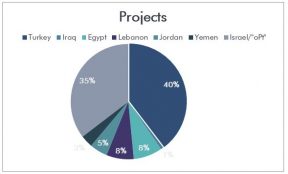 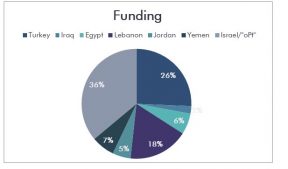 This disproportionate focus on the Israeli-Palestinian conflict on the part of EIDHR deprives needy countries of funds and assistance and is detrimental to the rest of the Middle East, which consistently ranks in the lowest levels of individual freedom,8 freedom of the press,9 democracy,10 and human rights11 (with the exception of Israel). Moreover, this focus is also inconsistent with EIDHR’s five objectives for 2014-2020, which place special emphasis on support to human rights, democracy, and elections.

Notwithstanding the violent conflict between Israel and the Palestinians, the disproportionate emphasis on this issue suggests that structural and political factors are more important than substance in the process of grant allocation. As the below graphs demonstrate, of all Middle Eastern countries currently engaged in armed conflict, Israel/”oPt” still receives the highest amount of funding and the second highest number of projects. This despite the fact that conflict in Afghanistan, Yemen, Iraq, and Syria each caused over 10,000 deaths per country in 2017 alone.12 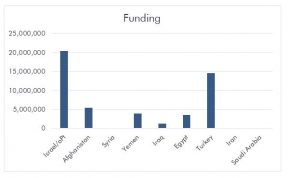 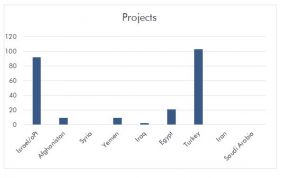 The Veneer of Transparency

While EIDHR maintains a degree of transparency regarding funding activities, there are notable exceptions. Considering that billions of public, taxpayer euro are being invested in projects and organizations in the name of European citizenry, these exceptions become highly problematic.

Given the sheer multiplicity of instruments (in addition to EIDHR) and indirect funding, it is difficult for the European Parliament and any other interested party to track funds. This complexity inevitably results in compromised transparency, overlapping areas of responsibility, and inconsistent objectives.

Focusing exclusively on EIDHR, the key to evaluating transparency rests with “searchability” – the ability of an interested party to trace reported data back to decision making on policy priorities, budgetary distribution, and other micro- and macro-level processes.

The principle method of ascertaining information related to EIDHR grants and beneficiaries is the EU’s Financial Transparency System (FTS). While the FTS does provide a partial record of EU spending (specifically that of the Commission), it is often inconsistent with other sources and does not substitute for coherent and framework-specific reports, to be checked against the calls for proposals. Additionally, the “searchability” of project indicators such as budget reference numbers and lines is not clarified and cannot be easily checked against other sources.

For example, while attempting to locate additional information on the €980,000 grant on torture pictured below, a search for the project’s budget reference indicator returns no matches on FTS nor any other EU data source. However, a search for the project budget line and number returns documents related to a “restricted call for proposals” for the Former Yugoslav Republic of Macedonia, Guyana, and Suriname. Nothing related to Israel or “oPt,” despite the fact the project description explicitly mentions Israel and Palestine. 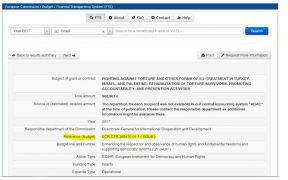 Other sources such as Delegations, EuropeAid, Calls for Proposals (CfP) and Tenders, and the Commission are all sporadic and inconsistent in their reporting. Moreover, there does not appear to be any direct reporting regarding the decision-making process. Questions related to funding amounts and priorities, as well as how specific budgets and beneficiaries are selected seem to be unavailable to researchers, journalists, MPs, and the general public, marking a serious failure of both transparency and accountability.

This failure in searchability and the overall complexity of the instrument not only causes shortcomings in transparency and accountability, but also adversely affects the overall efficiency of EIDHR. These concerns are also held by member states as well. According to the June 2017 EU External Evaluation of EIDHR, member states either did not “know much about EIDHR, or felt it is not well coordinated.”13

While the EU claims to expressly oppose BDS and support a two-state solution, there is significant evidence of extensive funding for NGOs with agendas and/or values that contradict EU policy. When confronted with such evidence, the EU consistently responds that it “funds projects submitted by NGOs, in line with [the] EU’s fundamental principles and values, but not NGOs themselves.” Such a position has exacerbated friction with Israel and is a contributing factor to the negative view the majority of Israelis hold in regards to the EU. In fact, a recent poll carried out by the Rafi Smith Institute indicated that 55% of respondents said they consider the EU “more of a foe,” while only 18% view it as “more of a friend.”14

Indeed, the authors of the EIDHR evaluation note that EU Member States expect the EU to use EIDHR funding in the “oPt” “for the EU to be more critical vis-à-vis the Israeli government on [human rights] violations in oPt.”15 Instead of focusing on EIDHR as an instrument to advance critical goals of Palestinian human rights, democracy, and fundamental freedoms, it is seen as a tool to criticize Israel. Such blatant partiality and politicization undermines EIDHR’s credibility and the EU’s ability to implement its aforementioned five objectives, and harms EU-Israel relations.

Such bias, along with continued EU funding of organizations whose behavior and platforms (e.g., BDS) are in contravention to EU policy, remain a point of contention between Israel and the European Union.

This tension has led to public friction between Federica Mogherini, High Representative of the European Union for Foreign Affairs and Security Policy, and Israel’s Public Security Minister, Gilad Erdan. The situation culminated in Ms. Mogherini extending an invitation to Minister Erdan to visit Brussels and discuss the issues.