The European Union (EU) is the single largest donor to non-governmental organizations (NGOs) active in the Arab-Israeli conflict, accounting for NIS 28.1 million in 2012-2014 to politicized Israeli NGOs alone.

Indeed, NGO funding is a central component of EU foreign policy, claiming to promote peace, cooperation, and human rights. In contrast to the stated objectives, the EU funds a number of highly biased and politicized NGOs that exploit the rhetoric of human rights to promote anti-Israel BDS (boycotts, divestment, and sanctions) and lawfare campaigns, inflammatory rhetoric, and activities that oppose a two-state framework.

Due to the highly complex and poorly coordinated nature of EU aid and to the lack of a consolidated database differentiating between NGOs and other types of organizations, it is impossible to determine the exact amount or proportions of EU funding to organizations that promote anti-Israel BDS.

However, NGO Monitor reviewed a number of EU regional funding programs designated for Israel, the West Bank, and Gaza, and found that 29 out of 100 EU grants administered through the frameworks reviewed funnel funds to BDS organizations (€16.7 million out of €67.1 million – roughly 25%). 42 out of 180 EU grantees in total support BDS – either through participation in activities and events, signing of petitions and initiatives, and/or membership in explicit BDS platforms. Several organizations were the recipients of more than one grant. See below for an explanation of the methodology, numeral analysis of the findings, and list of relevant grants along with BDS activities of respective beneficiaries.

Grants in € to BDS supporting organizations 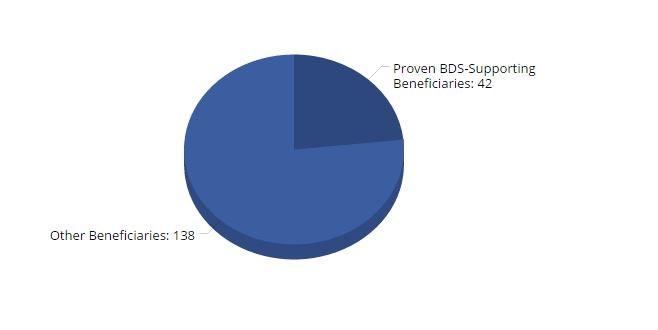 When confronted by evidence of funding for NGOs with agendas or values that contradict EU policy, the EU’s recurring response is that it “funds projects submitted by NGOs, in line with [the] EU’s fundamental principles and values, but not NGOs themselves.” This distinction is irrelevant, as project funding inevitably is used for overall organization and activity expenses. Because money is fungible, EU funding ostensibly allocated to specific projects also supports the NGO’s infrastructure including funding for staff, equipment, office space, publicity for the organization and its campaigns, and the significant costs of writing more grant applications, as well as allowing officials of these NGOs to travel and promote their agendas around the world. In several cases, EU funding comprises 50%, 60%, or even 75% of an NGO recipient’s entire budget. Moreover, many recipients feature the EU symbol on their publications and websites, bolstering their legitimacy and linking the EU with the broader political activities and campaigns of the NGOs – such as boycotts and the rejection of normalization.

A grant titled “Performing Arts: A Pathway Towards Self Expression and Democracy” (# 16 in the list of grants below) amply demonstrates this flawed logic. In 2014, during their participation in the EU’s Cultural Programme, all twelve beneficiaries of this grant initiated a group statement calling for a cultural and academic boycott of Israel. The group officially registered as the Palestinian Performing Arts Network in the Palestinian Ministry of Interior in February 2015, also during the members’ participation in the EU program. According to their website, which features their BDS statement, the EU and the Swedish consulate in Jerusalem are their sole donors.

The following is a list of 29 EU grants, whose beneficiaries include NGOs that participate in BDS campaigns against Israel. All grants have an end date after November 2015.

The grants were administered through a number of EU country-based programs: European Instrument for Democracy and Human Rights (EIDHR), European Partnership for Peace (PfP), Non-State Actors (NSA) program, East Jerusalem Programme, and Cultural Programme; for one additional grant (#7 in the list below), the funding program remains unclear (see Additional Information at the end of this document). The list does not include global thematic funding programs; humanitarian funding; country-specific funding to regions other than Israel, the West Bank and Gaza; or any form of indirect funding (for example, EU funds to a church or humanitarian aid group, that are then transferred to a political NGO). A full accounting of the proportion and extent of EU-funding to BDS-supporting beneficiaries is therefore not available.

Because many of the BDS-supporting organizations listed here are grant co-beneficiaries, and due to the absence of transparency, it is not possible to determine the exact amount of funding received by each organization. A number of organizations were funded through more than one EU grant, sometimes as part of the same program (see Double Dipping below).

Only beneficiaries whose support of BDS could be adequately demonstrated were included. Regardless of whether the NGOs openly declare or deny their support for BDS, all provide material support for BDS initiatives and efforts – either through participation in activities and events, signing of petitions and initiatives, and/or membership in explicit BDS platforms. NGOs whose materials are used to promote BDS but which do not explicitly endorse or participate in these activities are not included.

13 of the 42 BDS-supporting beneficiaries received more than one grant, three through the same funding framework: