The United Nations Office of the Coordination of Humanitarian Affairs (OCHA) coordinates millions of dollars in humanitarian aid provided by governments every year to non-governmental organizations (NGOs) in Israel, the West Bank, and Gaza. As part of its “Humanitarian Response Plan (HRP),” aid appeals are divided into thematic groups, or “clusters.”1 In Israel, the West Bank, and Gaza, these clusters include Protection, Education, Shelter/NFI (non-food item), Health and Nutrition, WASH (Water, Sanitation, Hygiene), and the Food Security Sector (FSS).2

Within each cluster, NGOs serve as implementing partners with UN agencies, and in some cases, are responsible for leading the cluster. According to the UN, “Clusters provide a clear point of contact and are accountable for adequate and appropriate humanitarian assistance. Clusters create partnerships between international humanitarian actors, national and local authorities, and civil society.”

Under the guidance of or based on the HRP recommendations, individual government aid agencies select the projects and NGOs that they wish to support. These processes, like much of government funding for NGOs, particularly in Europe, lack transparency. As part of the 2017 HRP, NGOs received $43.2 million (out of a requested $136 million) in government-provided humanitarian aid within the different clusters.

In practice, the cluster system is a key international lobbying and action mechanism through which the PA advances its nationalist and political agenda, sustaining conflict. As the following analysis demonstrates, the NGOs promoted in the 2017 HRP advance political agendas that are inconsistent with the humanitarian principles, including impartiality, independence, and neutrality. The work of these clusters almost entirely ignores Palestinian terrorism, incitement, and other Palestinian human rights abuses.

The politicization of aid is particularly significant in the Protection Cluster, Food Security Sector, and Health Clusters. Numerous NGOs that receive funding under the HRP support BDS (boycott, divestment, and sanctions) and other overtly political campaigns against Israel, and several have ties to the Popular Front for the Liberation of Palestine (PFLP) terrorist organization, as detailed below. Claiming to advocate for Palestinians while promoting economic harm against Israelis and material support for terrorism is a violation of international law, human rights, and humanitarian principles.

Analyzing NGO funding under the 2017 HRP highlights the influence of the Norwegian Refugee Council (NRC), which is among the leaders of political advocacy targeting Israel. Under the 2017 HRP, NRC received $18.3 million, including large amounts from the UK and the EU for work within a number of clusters. Furthermore, NRC serves as the “Cluster Lead Agency” (CLA) for Shelter Cluster Palestine and co-chairs the Protection Cluster’s Legal Task Force (see below).

The following examples demonstrate the political advocacy, and not necessarily humanitarian work, of the various clusters that are led by a narrow group of secretly selected NGOs. 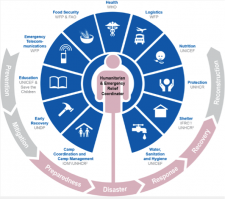 Appendix I: Annual Funding to NGOs in Each Cluster

NGOs receive significant government funding coordinated through the HRP. This NGO funding amounts to approximately $35-40 million annually, much of which is channeled to political advocacy campaigns.

**On June 15, 2016, Mohammed El-Halibi, the manager of operations for World Vision in Gaza, was arrested by Israeli authorities. On August 4, 2016, the Shabak, the Israeli security agency, revealed El-Habibi to be a Hamas terrorist. He was accused of diverting approximately 60% of the World Vision’s Gaza budget to the terrorist organization for tunnels and fund other terrorist activity. The siphoned funds amount to approximately $50 million.

A number of Palestinian NGOs that request funding in the various clusters have ties to the Popular Front for the Liberation of Palestine (PFLP) terrorist organization. Under the 2017 HRP, these PFLP-affiliated NGOs received funding through the Protection, Health, and FSS Clusters.

The Norwegian Refugee Council (NRC) is a leader of massive and unprecedented legal advocacy, which floods Israeli courts with hundreds of cases annually. With a focus on political, as opposed to humanitarian, aims, NRC targets some of the most highly sensitive political issues in the Arab-Israeli context.

Under the 2017 Humanitarian Response Plan, NRC received $18.3 million (out of a requested $24.2 million) in funding. NRC serves as the “Cluster Lead Agency” (CLA) for Shelter Cluster Palestine and co-chairs the Protection Cluster’s Legal Task Force.

NRC partners with highly political NGOs to carry out its legal advocacy. Under the 2017 HRP, NRC funding for its NGO projects through the Protection, Education, and Shelter Clusters.