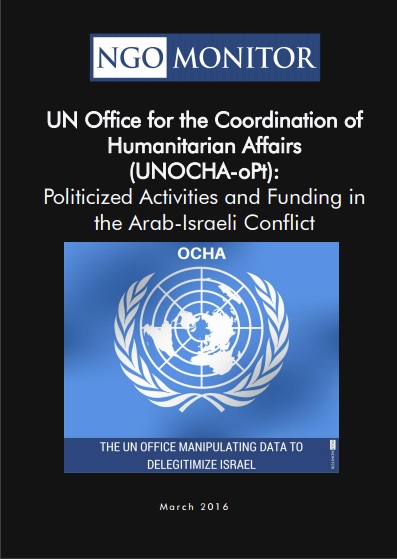 The United Nations Office for the Coordination of Humanitarian Affairs in the Palestinian territories (OCHA-oPt) acts as one of the primary coordinators of NGO (non-governmental organization) funding and activity in the Arab-Israeli conflict. These NGOs are highly active in promoting international BDS (boycotts, divestment and sanctions) and “lawfare” campaigns, and some even engage in blatantly antisemitic activities.

Based on the resources and impact of its status as a UN agency, OCHA amplifies their politicized and distorted claims by publishing numerous reports, factsheets, and informational databases that parrot NGO allegations. The NGO sources lack the credible research methodology and necessary military and legal expertise to draw credible conclusions. These claims are then repeated by journalists and diplomats, feature prominently in official UN reports, such as the discredited 2009 Goldstone report and the Commission of the Inquiry into the 2014 Gaza War, an provide fuel in the ongoing international delegitimization campaign against Israel.

Founded in 1998 by the UN Secretary General, with offices in over 30 countries, OCHA claims to: “Mobilize and coordinate effective and principled humanitarian action in partnership with national and international actors in order to alleviate human suffering in disasters and emergencies,” “Advocate the rights of people in need,” “Promote preparedness and prevention,” and “Facilitate sustainable solutions.”

OCHA receives much of its funding from the 27-member1 “Donor Support Group (ODSG),” which is composed of “government donors who act as a ‘sounding board’ and a source of advice on policy, management, budgetary and financial questions.”

One such SDC, called the “Protection Standby Capacity (ProCap) and Gender Standby Capacity (GenCap) Projects,” is specifically designed to “cover[] the Norwegian Refugee Council’s management and deployments of senior protection officers and senior gender advisors, as well as related training programmes.” (See below for additional information on the Norwegian Refugee Council.)

OCHA established a Country Office in 2002 ostensibly “to support international efforts to respond to the deteriorating humanitarian situation in the oPt [occupied Palestinian territory].”2

According to its website, OCHA-oPt works with “a range of operational partners on the ground, including UN agencies, international and local non-governmental organizations (NGOs), and the Red Cross and Red Crescent Movement, to assess the needs of people affected by conflict and disasters across the region.” It claims to seek regular dialogue with the Israeli and Palestinian authorities at various levels in order to promote what it claims is, “respect for international humanitarian and human rights law.” OCHA also maintains an “NGO Dialogue Platform,” which “complements the existing dialogue between OCHA and NGOs at the country level” and aims “to inform global policy issues.”

On its website, OCHA states that it “relies on the generosity of donors to fund its key activities in coordination and advocacy.” The only funding listed there is from 2013, with income of $4.9 million3.

OCHA regularly places sole blame for the continuation of the conflict on Israel, alleging that the “situation is characterized by a protracted occupation,” “the systematic denial of Palestinian rights,” and a “lack of respect for international law, and a lack of accountability for violations.”

These publications often repeat the unverified and unreliable claims of political advocacy NGOs, as well as information provided by the PLO and Hamas. OCHA’s claims are subsequently referenced, cited, and quoted at an extremely high volume by international media and government officials, as well as in official UN documents, including 60 references in the Commission of Inquiry (COI) on the 2014 Gaza War.

While OCHA publishes numerous resources on casualties claims and “Gaza Crossings’ Operations” (including the amount of people and goods allowed into and out of various border crossings), repeating the claims of politicized NGOs, it rarely, if ever, cites relevant Israeli government statistics, such as information published by the Coordination of Government Activities in the Territories (COGAT), the Israel Defense Forces, or the Israeli Ministry of Foreign Affairs.

In addition, OCHA regularly presents data in a manipulative way that erases the context of terrorism and distorts law and morality. For example, OCHA fails to make distinctions between Palestinian civilians and attackers, thereby amplifying Palestinian casualty claims, and drawing a false symmetry between legal Israeli self-defense and illegal attacks by terrorists. In its February 2-8, 2015 report, OCHA presents pie-charts purporting to show the number of “Palestinian fatalities by Israeli forces in the oPt”. Yet, this data as presented does not provide any information as to how the fatalities took place, including how many of the fatalities occurred while Palestinians were attempting to murder Israeli civilians or engaged in violent confrontations with Israeli law enforcement. As a result, it is impossible to make any meaningful assessments from OCHA’s figures.

OCHA similarly publishes a “Vulnerability Profile,” claiming to provide “the most comprehensive information on physical protection” of the Palestinians in Area C of the West Bank. According to OCHA, an estimated 297,900 Palestinians live under full Israeli security and administrative control. This claim, however, is nearly six times higher than the actual population, based on verifiable evidence. Shaul Arieli, a retired IDF colonel and prominent activist on the left of the Israeli political spectrum, including membership in an NGO known as the Council for Peace and Security has stated that OCHA’s report is “deception. Practically speaking, this [data] is meaningless. What [OCHA] did is completely political…”

Further illustrating OCHA’s biased agenda, its website features a “Demolition System,” which serves as “an inter-agency tool which tracks Israel’s demolitions and confiscations of Palestinian property in the West Bank.” This “system” omits the complexities of the Arab-Israeli conflict, including legal processes underway, disputed claims relating to ownership, illegal building, and terrorist affiliations of residents.

OCHA’s website also highlights a number of biased videos reflecting the Palestinian narrative, including “How long does it take to demolish a house?,” “Gaza: Only Rubble Where Homes Once Stood,” and “Walled Horizons.” These videos show scenes of destruction and despair, while completely omitting Palestinian terror, including rocket attacks against Israeli population centers and tunnels running beneath the border into Israel. The videos are devoid of all context and are aimed solely at demonizing Israel.

Similarly, OCHA repeatedly accuses Israel of maintaining a “blockade” on Gaza, causing an “acute water and energy crisis,” as well as other such allegations that distort the situation in Gaza.

In sharp contrast, reportedly, OCHA intentionally removed passages in its “2016 Syrian Arab Republic Humanitarian Response Plan” in order to paint the government of Bashar al-Assad in a more favorable light. According to Foreign Policy Magazine, after comparing the final document to an earlier draft “it is evident that 10 references to ‘sieged’ or ‘besieged’ areas, such as that in Madaya — the town in southwestern Syria that saw 23 people die of starvation over several months before the arrival of a U.N. aid convoy in mid-January — were removed.” In addition, OCHA failed to mention the “barrel bombs” that the Assad regime drops indiscriminately on populated areas.

The Humanitarian Response Plan (HRP) is one of the primary documents outlining UNOCHA’s agenda and view of the Arab-Israeli conflict, which is based solely on the Palestinian narrative of victimization and Israeli aggression. The HRP outlines OCHA’s regional objectives, which are aimed, directly and indirectly, at promoting “lawfare” against Israel. (In previous years, OCHA released similar documents under different names, including the “Consolidated Appeal Process” and the “Strategic Response Plan.”)

On this basis, OCHA explains that “Legal counselling and representation,” much of which is implemented by OCHA’s NGO partners, “will prioritize victims seeking accountability for IHL and IHRL violations, including violations of the right to life and physical integrity by Israeli security forces and settlers, those at risk of demolitions, forced evictions and displacement.” These services are not offered for Israeli victims of Palestinian violence.

Both the HCT and AWG are highly active in promoting political warfare against Israel.

The NGO umbrella groups Association of International Development Agencies (AIDA) and the Palestinian NGO Network (PNGO) are represented in the AWG:

OCHA oversees and facilitates government funding via several aid frameworks to some of the most biased and politicized regional NGOs, including a number that are very active in promoting BDS (boycotts, divestment and sanctions) and “lawfare” campaigns against Israel:

The aforementioned Humanitarian Response Plan (HRP) is one of the primary frameworks through which OCHA-oPt coordinates funding to NGOs. The HRP outlines OCHA’s politicized approach regarding its activities in the region, as well as which NGOs should receive vast amounts of international government funding.

In 2016, OCHA-oPt requested $571 million in aid from international donors for some of the most highly biased and politicized NGOs active in the Arab-Israeli conflict.

“Participating Organizations & Funding Requirements” in the 2016 Humanitarian Response Plan include:

In previous years, OCHA made appeals on behalf of:

The goal of the HPF is to support the delivery of aid identified under Humanitarian Response Plan, while also allocating funds to “unforeseen events or special requirements.” The HPF also aims to “foster[] cooperation and coordination” within and between OCHA’s thematic clusters (see below) and humanitarian partner organizations.

OCHA claims that “[i]nterventions supported by the HPF are to be consistent with the core humanitarian principles of humanity, neutrality, impartiality and independence.” In contrast to these stated objectives, the HPF coordinates funding to highly biased, pro-BDS NGOs, including Islamic Relief, ARIJ, Ma’an Development Center, Medical Aid for Palestinians, DanChurch Aid, and World Council of Churches.

CERF pools donor government contributions into a fund to be used to provide “immediate use at the onset of emergencies, in rapidly deteriorating situations and in protracted crises that fail to attract sufficient resources.”

In emergencies, “humanitarian organizations apply jointly for funding. Funds are immediately released if these proposals meet CERF’s criteria, i.e. the needs are urgent and the proposed activities will save lives.”

OCHA operates Clusters in the areas of Protection; Water, Sanitation and Hygiene; Shelter; Health and Nutrition; Education; and Food Security.

The Protection Cluster, which is responsible for “[m]onitoring and document[ing] violations,” “[p]rovision of legal aid,” and “[a]dvocacy and interventions with Israeli authorities (among other issues) is one of the most problematic in the Arab-Israeli conflict.

As the Israeli NGO of the Protection Cluster, B’Tselem provided the appearance of credulity to the casualty claims disseminated by OCHA officials and repeated widely by journalists, political leaders, and others.

Examples of activities of NGOs involved in the Legal Taskforce:

The Water and Sanitation Cluster is another highly problematic cluster active in the region. Like its partner NGOs, OCHA plays a major role in promoting a distorted narrative on water rights and availability, ignoring the negotiated agreements (i.e. Oslo Accords) that determine the water arrangements, internal Palestinian dynamics, and other complexities – in order to falsely accuse Israel of violating international law on water rights. (See Bar Ilan University study for an analysis of these false claims.)

2015-16 Donor Contributions to OCHA-oPt4, all amounts listed in USD