Geneva– United Nations officials are trying to prevent the type of virulent NGO activity that defined the 2001 NGO Forum at the first Durban conference. The UN sent security personnel to confront hateful posters and speech, and reportedly denied anti-Israel NGOs´ request for an official side-event.

In contrast, in the conference´s first substantive diplomatic session, Iranian president Ahmadinejad – as the highest ranking leader to come to the conference – used offensive and racist language against Israel (as well as the United States and the UN Security Council) that paralleled – if not exceeded – the demonizing rhetoric employed by NGOs.   In fact, Iranians, including NGO officials, are a major presence at the Conference and highly visible at events promoting anti-Israel rhetoric, intimidation and even violence.  The pressure by NGOs such as Human Rights Watch aimed at the US and other countries for not participating in the Durban Review Conference, coupled with the invitation extended to Ahmadinejad, demonstrates the inability of NGOs and the UN to promote the moral principles of universal human rights. 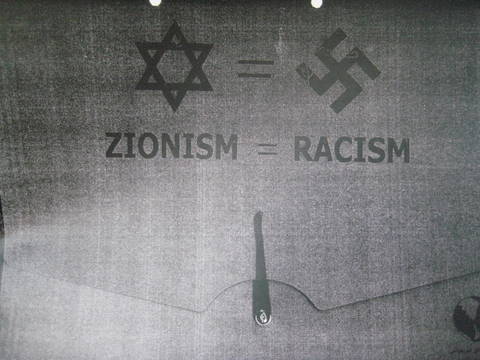 NGO Monitor representatives witnessed two incidents that demonstrate the UN´s commitment to prevent NGO incitement, in particular anti-Israel demonization, and distance itself from the 2001 proceedings. First, at the security checkpoint for NGO entrance to the UN facility, a supervisor instructed the officers to be vigilant against “Zionism = Racism” materials. He displayed a binder with a Star of David-Swastika logo (distributed by an Iranian NGO at the “Israel Review Conference”), and told them to make a copy of the badges and IDs of any NGO delegates who possessed it. 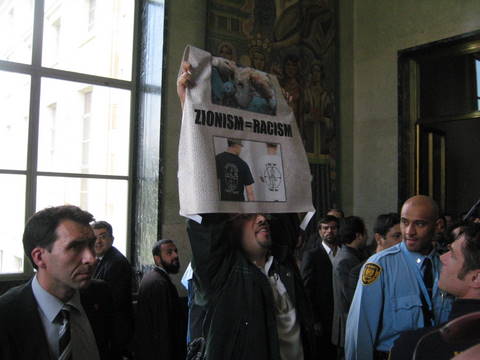 Later, during a heated, but non-violent confrontation outside Ahmadinejad´s post-talk press conference, UN security officers confiscated a poster with the “Zionism=Racism” slogan.

Additionally, Palestinian NGOs claimed that “all side-events pertaining to the specific issue of Palestine and Israel had been banned” by the UN. Specifically, Badil, the “right of return” NGO sought to organize a session on Israel´s “regime of institutionalised racial discrimination on both sides of the Green Line,” but it was reported rejected by officials in the UN Office of the High Commissioner for Human Rights. Badil (funded by Switzerland, Sweden, Denmark, the Netherlands,Trocaire), Al-Haq (Ford Foundation, Christian Aid, the Netherlands, Irish Aid, Norway, and Diakonia), and Adalah (NIF) issued a formal complaint to the office. 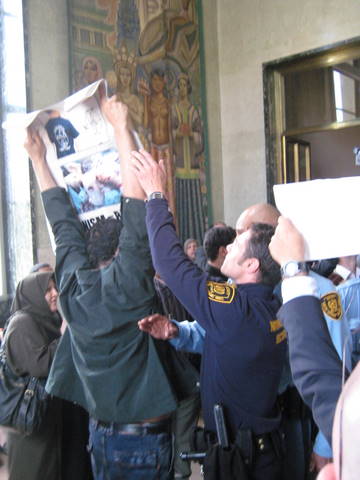 Ahmadinejad´s entered the main Assembly Hall to much fanfare, after all the delegates were seated: he was introduced by the president of the Review Conference as “His Excellency Dr. Mahmoud Ahmadinejad,” received a round-of-applause from some governmental delegates and enthusiastic Iranian NGOs, and was honored with an escort from the UN secretariat to the podium.

His diatribe was directed at Israel and the United States; he also attacked the veto powers on the UN Security Council. Demonizing rhetoric about Israel and Jews included:

When Ahmadinejad began his anti-Israel statements, the delegations of the European Union countries and a number of Jewish NGOs walked out of the plenary hall (in addition to a number of vocal Jewish hecklers who were forcibly removed). The Czech Republic joined the list of countries that have withdrawn from the conference entirely.  Afterward, the UN Secretary General, Ban Ki Moon, and the High Commissioner for Human Rights, Navi Pillay, repudiated the Iranian leader´s remarks, but the damage to the UN is irreparable.

HRW and other NGOs press for US participation, ignoring the real problems of the conference

While Canada, the US, Italy, Holland, Germany, Israel and other Western democracies decided not to participate, having decided that the Durban process could not be salvaged, and the principles should not be compromised for political expediency, Human Rights Watch (HRW) condemned these countries for “undermining” the conference. HRW also claimed (without credibility) that there was “no justification for the decision,” and pressed for “engagement.” Prior to Ahmadinejad’s speech, international NGOs including HRW, Amnesty, and others did not protest the giving the Iranian leader a platform, despite his Holocaust denial and Iran´s dismal human rights record.  HRW, for instance, merely stated that his attendance raised “concern” and blandly calling Ahmadinejad a “divisive figure” for his “controversial” statements on Israel and the Holocaust.    This lobbying helped legitimize Ahmadinejad´s absurd presence at a conference against racism.

Even after his hate filled speech, while HRW admitted that it “contradicted the spirit and purpose of the conference” and “Iran´s record of repressing peaceful dissent does great injustice to the struggle against racism and discrimination,” the NGO continued to advocate that governments “should respond by staying.” This language echoes Commissioner Pillay´s attempt to downplay the impact of such language used under the façade of human rights.

Remarkably, HRW drew a parallel between Ahmadinejad and the Western democracies that did not attend, claiming that their rhetoric was similar, while reiterating that the conference “was earlier undermined by the refusal of the United States to participate, which prompted walkouts by Australia, the Netherlands, New Zealand, and Poland.” They have thus confused effect (the walkout) with the cause, which is corruption of human rights, aided by the radical NGO network.

Israeli-Arab NGO Ittijah also criticized the US and Europe for “the American-Israeli blackmail which leads, with European assistance, to empty the important conference of the UN from any binding content.” Ittijah is planning a “campaign [that] will also include attacks against the positions of the Obama administration and the EU which covers the crimes of Israel against the Palestinian nation and over its racism.”

Ahmadinejad´s speech to the plenary of the Durban Review Conference confirms what many Western countries has anticipated – that the conference would be exploited again as a platform for demonization, delegitimization, and racism. Efforts by the UN to prevent a repeat of 2001 amongst NGOs, while important, were largely meaningless in the face of incitement within the governmental session, as well as the wider context. Unfortunately, HRW, which should use its international standing to promote the universality human rights, continues to campaign against the policies of those countries that take a principled stance against hate and racism, and refused to participate in a tainted process.