However, in Israel and the Palestinian Authority (PA), German government funds are directly and indirectly transferred to highly politicized NGOs. These NGOs oppose peace negotiations, promote narratives that reject the legitimacy of a Jewish state, exploit human rights principles, and, in some cases, express blatant antisemitism.

Churches play a central role in German development policy. Church aid organizations (MISEREOR and Bread for the World/EED), which receive most of their budgets from the German government, are major funders of politicized NGOs in Israel and the PA. Their grantees include some of the most radical political advocacy NGOs in the region. Rather than promote cooperation and peace, these groups continue to deepen the divide and further polarize societies. NGO Monitor research also shows that many recipients of German church aid funding do not have the competence to implement the official objectives or to advance German policies in the region.

Analysis of available NGO financial statements and donors lists indicates that Christian aid organizations in Germany provide a significant percentage of the budgets of the specific organizations operating in Israel (71% in 2012-2015) and the PA (accurate figures not available).

German church funding frameworks exhibit limited transparency and accountability. Most frameworks discussed in this study do not publish details regarding recipient organizations, the amounts of allocations, or information on how grantees are selected. Rather, the funding details provided in this report have been gathered through analysis of NGO annual reports and financial reports to the Israeli Registrar of Non-Profits. Further, most church funders offer no public evaluation or assessment mechanisms that would allow analysis of and accountability for the impact of the projects funded by taxpayers’ money.

Based on this research, NGO Monitor recommends a set of guidelines for the German government, for both direct and indirect NGO funding:

The NGO Forum of the 2001 Durban Conference adopted a strategy of political warfare and delegitimization against Israel, using allegations of “apartheid,” “racism,” “war crimes,” and similar rhetoric. Implemented by a network of non-governmental organizations (NGOs), this strategy operates under the banners of human rights, democracy, peace, and humanitarian aid. NGOs exploit tactics such as BDS (boycotts, divestment and sanctions), and abuse universal judicial frameworks such as the International Criminal Court to target Israeli officials and block counter-terrorism efforts (“lawfare”). Much of the funding for the NGOs leading these demonization campaigns comes from European governments. The NGO campaigns actively work against the policies advanced by these same governments.

The BDS campaign views churches as a key target for cooptation and promotion of their agenda:

“Religious institutions are seen in many communities as embodying important moral and ethical principles… Divestment campaigns that target companies such as Caterpillar have been initiated in a number of major Christian churches. Not only will successful divestment campaigns financially weaken the Occupation, but will raise both the public profile and legitimacy of the BDS campaign.”

In this report, NGO Monitor focuses on German church aid organizations’ support for Israeli and Palestinian NGOs that are centrally involved in this Durban strategy of political warfare. We provide systematic analysis of the activities of these organizations, their relationships with their respective German counterparts, and when possible, funding details.

Germany is one of the leading countries worldwide in providing development aid. In absolute terms, in 2011, Germany (€10.2 billion) was the second largest bilateral donor after the United States. Germany committed itself to increasing its development assistance allocation to 0.7 per cent of gross national income (GNI) in 2015.

Direct funding to NGOs originates in the German Ministry of Foreign Affairs, the Ministry for Economic Cooperation and Development (BMZ), and other government branches. BMZ is the leading ministry that develops the guidelines and fundamentals of development policy, and allocated 11.9% (€777.4 million) of its 2015 budget to “civil society and economic organizations and institutions.”

Some of this German funding for NGOs is then channeled via church-based aid groups and powerful political foundations associated with German political parties. The two main church-related organizations that are active internationally and receive funding from BMZ are Bread for the World/EED (Brot für die Welt – Evangelischer Entwicklungsdienst, EED), associated with the Protestant Church, and MISEREOR, associated with the Catholic Church. Both have been working for 50 years within the framework of German development cooperation ostensibly to ease poverty and enhance living conditions.

Bread for the World/EED (BfW/EED) and MISEREOR are also part of VENRO, an umbrella organization of development and humanitarian NGOs in Germany that was founded in 1995 in order to represent NGOs in the political arena and strengthen their influence in decision-making processes. As stated on its website, at the time of VENRO’s creation, “NGOs wanted to be not only helpers of the south, but also a critical voice in north-south politics and to exert their influence on political decision-makers.” 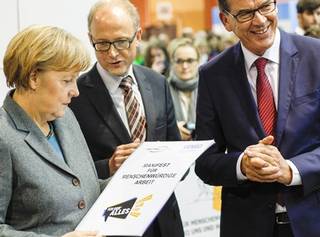 VENRO has a working group (Kofinanzierung) designated for “intensive political dialogue” with BMZ and the European Commission, advising them on funding guidelines and selection of beneficiaries. At the same time, many VENRO members, among them MISEREOR and BfW/EED, are themselves heavily funded by the German government. VENRO is also a member of the NGO network CONCORD, which regards itself as “the main interlocutor with the EU institutions on development policy.”

VENRO’s current CEO, Dr. Bern Bornhorst, is head of the “politics and global issues for the future” department (PGZ) at BfW/EED. His deputy at VENRO, Dr. Klaus Seitz, is head of the political department in MISEREOR. As indicated by their titles, the two are responsible for political lobbying for their respective organizations.

These two German church aid organizations often do not promote peace: they partner and fund politicized NGOs that advocate for BDS (boycott, divestment, and sanctions) campaigns against Israel, manipulate legal systems to demonize Israel, and single out Israel internationally.

During the wave of stabbing attacks on Israeli civilians by Palestinian perpetrators that began in October 2015, NGOs funded by German church aid organizations including Adalah, Coalition of Women for Peace, Physicians for Human Rights-Israel, and Al Haq, all released statements criticizing Israeli policy and actions that killed or wounded Palestinians, without noting that these individuals were neutralized while in the middle of perpetrating terror attacks.

Al Haq maintains a list on its website that records each attack as an “alleged” crime, and emphasizes that the Palestinians were killed by Israelis, as if unprovoked. Al Haq does not refer to the attacks as criminal or illegal, nor does it attempt to ascertain the identities and conditions of the Israeli victims.

In this regard, the statements of Al Haq and other NGOs are inconsistent with human rights, promotion of the rule of law, and fact-finding, deny Israelis the rights to life and self-defense, and erase the many victims of Palestinian terror attacks, including children and the elderly.

Bread for the World (Brot für die Welt) was founded in 1959 in the framework of the Protestant and Free Churches in Germany, within the Ecumenical Diakonia, a department of the Social Service Agency (Diakonisches Werk) of the German Protestant Church.

BfW/EED shares the mission of “supporting churches and partner organizations worldwide in their struggle for improved living conditions for the poor, for justice, peace and human rights as well as for the integrity of creation!” It is a member of the Act Alliance, a coalition of churches created by the World Council of Churches (WCC). The Act Alliance and WCC both play key roles in mobilizing international BDS campaigns against Israel. Forty-eight percent of BfW funding for 2014 came from the German government’s BMZ office.

BfW/EED (as well as its composite elements before the merge) engages in highly politicized activities, while simultaneously funding other biased NGOs active in the Arab-Israel conflict.

Most of the speakers involved in this conference were affiliated with radical Palestinian NGOs deeply involved in delegitimization, BDS, and lawfare targeting Israel:

BfW/EED sponsored a December 2014 “Canaan Conference” in Berlin titled “Trialogue with Israel and Palestine,” which included radical NGOs Israeli Social TV, New Profile, and Café Palestine Freiburg. While the Canaan conference claimed to be “a platform for bi- and trilateral communication between women from Palestine, Israel and Germany,” it featured many inflammatory speakers, including one who reportedly declared “Zionists are racists.” Café Palestine Freiburg has previously advocated “dismantling Jewish ideology” and has been accused of stoking modern antisemitism.

In a September 13, 2013 article, “20 Years since the Oslo Accords: Learning from the History of the Middle East Peace Process,” BfW blames the failure of the peace process on Israel, while failing to mention Palestinian rejectionism, violence, incitement, corruption, and the role of Hamas.

BfW/EED publishes inaccurate water libels, alleging insufficient and inequitable water distribution, ignoring evidence that Israel provides Palestinians in the West Bank with more water than required under the Oslo framework and that thieves are responsible for stealing up to 50% of supplies in some Palestinian areas. In so doing, BfW manipulates and distorts water issues in order to falsely portray Israel as a brutal regime.

CWP (Coalition of Women for Peace)

Examples of its activities:

MISEREOR is the aid framework of the Catholic Church in Germany, and a member of CIDSE, a network of Catholic aid organizations. The organization claims to “work with a host of domestic partners to provide assistance against poverty and political suppression.”

According to its website, “MISEREOR works with a host of domestic partners to provide assistance against poverty and political suppression.” Advocacy is a central goal of MISEREOR . The organization “aims to influence public opinion and policymaking. Political education, the exchange of experiences and networking are key elements of this work. This is how MISEREOR helps enable its partners and the beneficiaries to overcome structural injustices … appeal[ing] to the consciences of the powerful in Europe.”

In contrast to these stated worthy objectives, MISEREOR provides funding to highly politicized NGOs including Zochrot, Sadaka Reut, HaMoked, and the Society of St. Yves. Many of MISEREOR’s grantees play central roles in the demonization and BDS campaigns against Israel.
MISEREOR claims that it “stands for transparency,” but does not provide details on amounts it grants to NGOs. Available funding information is based on NGO Monitor research and details provided by the NGOs under the Israeli NGO transparency law (2011).

MISEREOR also sponsors events about the Arab-Israeli conflict that are highly politicized or are organized in connection with biased partners:

HaMoked: Center for the Defense of the Individual

Funding information is provided primarily by recipients in their reports to the Israeli Registrar of Non-Profits and may be incomplete. “Unknown” refers to funding data that was not listed in annual reports and not provided through correspondence with the respective funding frameworks.

German federal funding is allocated to, amongst others, political advocacy NGOs that promote BDS and lawfare campaigns, through direct and indirect funding mechanisms.