Introduction
Since 2010, six documents from the offices of EU representatives in Israel and the Palestinian Authority have been leaked to the Israeli and international media. The leaked documents are:

The documents repeat many of the false, inaccurate or misleading allegations made by a select group of non-governmental organizations (NGOs) that are based in Israel and the Palestinian Authority but receive much of their funding from the EU and member states. For example:

The issue of Jerusalem is highly complex and sensitive, and any external intervention must be carefully considered in order to avoid actions that can contribute to conflict and violence.Jerusalem Documents

However, both the 2010 and 2011 EU reports on Jerusalem do not display these requirements, including the absence of substantive references or footnotes. It is evident from the data presented, the rhetoric used, and the specific topics discussed that both reports are based mainly on highly politicized and unreliable NGO publications.

For instance, the section titled “Planning Demolition, Evictions and Displacement” in the 2011 report appears to be based almost entirely on an ICAHD document “No Home No Homeland: A New Normative Framework for Examining the Practice of Administrative Home Demolitions in East Jerusalem” (October 31, 2011). ICAHD is a fringe political NGO that accuses Israel of “apartheid,” “ethnic cleansing,” and creating a “model of terrorising a civilian population into fear of resistance, [which] combined with warehousing them after traumatisation, provides a laboratory for oppression and exploitation of a people which is marketable for export to powerful states.” Similarly, the “Archeology” section appears to be based on the agenda and claims of the Israeli NGO, Emek Shaveh; the “Education” section is based on a joint ACRI-Ir Amim report. Other sections appear to be based on OCHA and U.S. State Department reports, which also rely extensively on NGO narratives.

In accordance with the biases and distortions of these NGOs, the leaked EU 2011 Jerusalem report claims to document “deterioration on the ground” and repeats unsubstantiated allegations of “unjustified” house demolitions and discrimination in health and education.

The EU reports and accompanying policy recommendations also omit key evidence that is inconsistent with the NGOs’ agendas. For example, in 2011, the Jerusalem municipality provided building permits for Arab residents of Jerusalem at a level comparable to Jewish residents; built post offices, public clinics, and classrooms; inaugurated the light rail, which serves both Arab and Jewish neighborhoods; and started to implement other programs for the benefit of Arab neighborhoods. Moreover, it does not appear that the EU consulted with the Israeli government or officials from the Jerusalem municipality to verify the NGO claims in drafting this document.

In addition to these quotes, which reflect the extent to which the EU Jerusalem reports are based on NGO claims, the documents absolve the Palestinians of any responsibility for the issues considered. Furthermore, the complex security context of Israeli actions since the beginning of the Palestinian terror campaign in 2000 (the “Second Intifada”), and the historical background are often ignored, resulting in a highly distorted narrative.

The EU and the Arab Citizens of Israel

On December 16, 2011, several media platforms published excerpts from a “classified EU document” discussing another very complex and sensitive internal Israeli issue – the status of the Arab-Israeli citizens. Unlike the Jerusalem reports discussed in this report, the full text of the EU’s Arab-Israeli document is not publically available.

The selective press accounts cited recommendations that the EU treat this as a “core issue, not second tier to the Israeli-Palestinian conflict.” One media report asserts that the document is designated “food for thought,” as opposed to a policy “report.”

According to Ha’aretz and The Independent, the document discusses “The stalemate in the peace process, and the continuing occupation, [that] inevitably has an impact on the identification of Israeli Arabs with Israel.” Ha’aretz reported that an earlier draft “also included suggestions for action the EU should take, but these were removed from the final version at the insistence of several countries.”

A press release by the Israeli political advocacy NGO Adalah (December 22, 2011; original in Arabic) claimed that the leaked EU document “adopts many of the recommendations contained in the report on ‘European Union and the Palestinian minority in Israel,’ issued by Adalah and the Arab Association for Human Rights Network Euro-Mediterranean Human Rights Network (EMHRN) in February 2011.” (Both groups are funded directly by the EU.) This was not the first time that the EU copied Adalah’s talking points. In February 2011, following the publication of Adalah’s report and “increased advocacy efforts before the EU”, the EU released a statement “that called upon Israel to protect the rights of Arab citizens of Israel.”

Additionally, two weeks before the leak (November 30), Adalah presented to the EU a “briefing paper” titled “Major developments regarding the rights of Palestinian Arab citizens of Israel in 2011.” The report discusses Knesset legislative proposals, the Bedouin in the Negev, alleged “discriminating government policy towards Arab citizens,” and the claimed “attack on human rights organizations and activists” – the same subjects reportedly addressed in the EU document.

This process illustrates the closed echo chamber created by the EU and the selected NGOs that receive funding, which excludes detailed analysis and provides an incentive for maintaining EU funding for future NGO projects.

On March 14, 2012, the EU Observer reported that EU officials in Ramallah had published “an internal three-page report dated February 2012” claiming that “Israeli authorities are not doing enough to stop a massive increase in attacks by Jewish extremists against Palestinians.” This document was later posted online by a Dutch organization.

The EU Observer also reported that EU officials “depicted settler attacks as part of a broader Israeli campaign to get rid of the Palestinians,” and that “an earlier eight-page EU report on the subject dated April 2011 – also seen by this website [the EU Observer] – said Israel has created an ‘atmosphere of impunity’ for Jewish attackers, amounting to ‘tacit approval by the state.’” The EU appears to be unaware of the Israeli government’s response, failing to mention the widespread condemnation of this violence and the establishment of a special police task force to address this issue.

The EU report also blames settler violence for Palestinian terrorism and violence: “the Palestinian population who, in the absence of protection or legal remedy may increasingly support other means in an effort to improve their situation.”

As with the other leaked documents, a small group of political NGOs are central contibutors to the EU’s analysis. For instance, the 2012 report cites a Yesh Din allegation that “over 90% of complaints and files were completed without indictments …Subsequent reporting has confirmed this trend of impunity.”

The Yesh Din allegations are highly misleading and unverifiable, as documented in a detailed analysis. Yesh Din also fails to provide comparative data that would indicate whether its claims regarding the West Bank are anomalous or typical for police investigations in Israel or elsewhere.

The EU report also relies on unnamed Israeli human rights NGOs to claim that “the IDF method of preventing incidents of settler violence is to restrict Palestinians access to land near settlements in some areas of the West Bank” – once again erasing the Israeli government policies which directly address these complex issues.

Similar to the other documents, the leaked EU report “Area C and Palestinian State Building” also uses NGO data and claims as the basis for recommendations that seek to alter Israeli government policies. More than half of the references cite NGO publications, both directly, and indirectly via the UN Office for the Coordination of Humanitarian Affairs (OCHA)1, including their incorrect or unverifiable claims. While OCHA is cited at a similar frequency to NGO reports, NGOs are often the original sources for the OCHA publications.

A clear example of data recycling, without verification, is the reference to Save the Children UK for the claim that “[p]rior to the Israeli occupation in 1967, Palestinian population of the Jordan Valley was estimated at between 200,000 and 320,000. As of 2009 the population is approximately 56,000…” This is used as evidence that “the Palestinian presence in Area C has continuously been undermined…by Israel as occupying power.” These figures originated with the Palestinian NGO Ma’an Development Center, whose “data” change from report to report, and Ma’an cites no external sources. The numbers appear to be greatly inflated: According to the 1961 Jordanian West Bank census, the population of the “Jericho district” (may refer to the whole of the Jordan Valley; at a minimum, comprises the most populated area) was 63,980, and according to Israel’s 1967 West Bank census, the population of the Jericho district was 9,078. According to the census data, the entire population of the West Bank was approximately 600,000 in 1967, and the Jericho district was one of the least populated regions; if the Ma’an/Save the Children/EU data were accurate, the Jordan Valley would have been the most populated, not the least populated, district.

In other words, the EU is again simply repeating unsupported NGO claims, without due diligence and independent examination, in order to bolster unfounded policy recommendations. 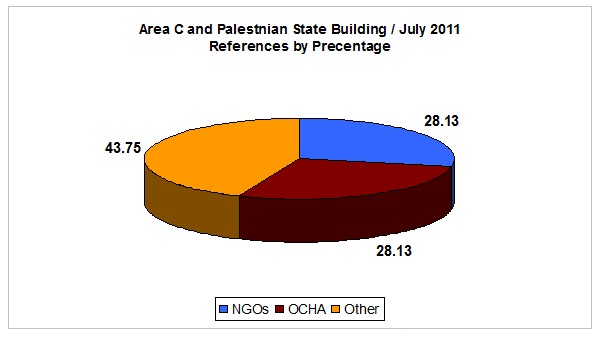 OCHA reports are largely based on NGOs, as well on other OCHA documents, creating a closed circle of unreliable citations and references. For example, the references in “Restricting Space” include 22 references (45%) to three NGOs, 19 of them quoting the same report authored by Israeli political advocacy NGO Bimkom. 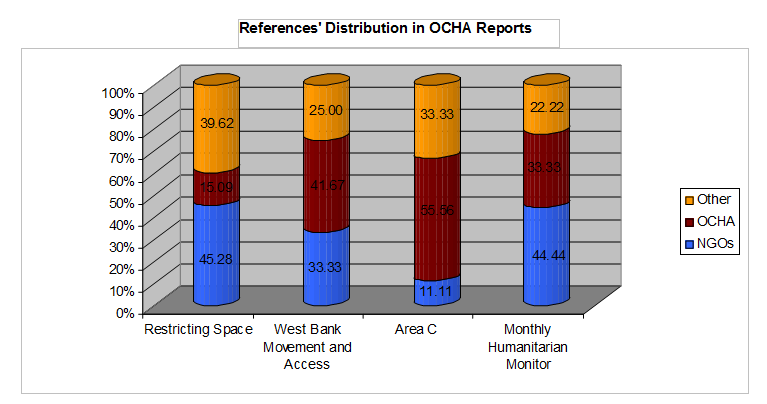 Over the past five years, NGO Monitor has documented the systematic absence of transparency and accountability in EU and European government funding for non-governmental organizations (NGOs) that selectively attack Israeli policies. The European Commission and most European governments release little or no significant information on these funding processes, by which an estimated €50 million that originate with European taxpayers are transferred annually to highly problematic political advocacy NGOs. (These political activities have been documented in detailed by NGO Monitor.)

For all parties impacted by this European public funding involving tens of millions of euros, information on the individuals making these decisions (to ensure against conflicts of interest), the nature of the evaluations, and other key aspects are necessary.

Therefore, beginning in 2008, NGO Monitor filed Freedom of Information requests with the European Commission seeking documents related to the NGO funding processes and structures, but all such requests were denied under a variety of rationales. In January 2010, NGO Monitor filed a lawsuit against the European Commission in the European Count of Justice. However, in two years, not a single hearing has been held, further highlighting the intensity with which the EU seeks to prevent any funding public disclosure or discussion regarding funding for political advocacy NGOs.

As a result of this secrecy, which has enveloped NGO funding provided by European governments in violation of democratic transparency norms, has also led to a number of Israeli legislative initiatives. Instead of adjusting policies to increase transparency and accountability, Israeli NGOs and their European backers attack the proposals as “anti-democratic.”

*The report cites a May 2010 report by Bimkom, but no such publication was found