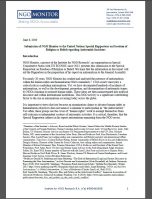 NGO Monitor, a project of the Institute for NGO Research,1 an organization in Special Consultative Status with UN ECOSOC since 2013, presents this submission to the Special Rapporteur on Freedom of Religion or Belief. We hope that the information in this report will aid the Rapporteur in the preparation of his report on antisemitism to the General Assembly.

For nearly 20 years, NGO Monitor has studied and analyzed the presence of antisemitism within the human rights and humanitarian NGO community.2 Civil society must play a critical role in combating antisemitism. Yet, we have documented hundreds of incidents of antisemitism, as well as the development, promotion, and dissemination of antisemitic tropes by NGOs claiming to promote human rights. These ideas are then mainstreamed into political discourse and within international institutions. This NGO activity is a significant contributing factor to the rise in antisemitism occurring today across the globe.

It is important to stress that just because an organization claims to advance human rights or humanitarian objectives does not mean it is immune to participating in “the oldest hatred.” Too often, these groups use the cover of “human rights” work to exempt themselves from self-criticism or independent scrutiny of antisemitic activities. It is critical, therefore, that the Special Rapporteur address in his report antisemitism emanating from the NGO sector.

Per the Special Rapporteur’s Call for Written Submissions, NGO Monitor’s submission provides information on “incidents of advocacy of antisemitic hatred that constitutes incitement to discrimination, hostility, or violence” and “incidents of dissemination of antisemitic propaganda, negative stereotyping, and other forms of antisemitic hate speech, including Holocaust denial” taking place with the human rights and humanitarian NGO community. We detail such incidents within the context of examining state responses to antisemitism (Section I) and best practices by non-state actors (Section II). We conclude with recommendations.

In setting the scope of this report, NGO Monitor notes the Special Rapporteur’s reference to the International Holocaust Remembrance Alliance’s (IHRA) definition of antisemitism in his call for written submissions. As of May 2019, this working definition, launched in 2000 at the Stockholm International Forum on the Holocaust3 has 32 country members, 11 observers, and 7 permanent international partners,4 including the Claims Conference, the European Union’s Agency for Fundamental Rights (FRA), International Tracing Service, the OSCE Office for Democratic Institutions and Human Rights (OSCE/ODIHR), UNESCO, the UN, and the Council of Europe. The IHRA working definition has been adopted by more than 30 countries around the world,5 including the UK, Austria, Australia, Bulgaria, Germany, Lithuania, Romania, and Macedonia. The United States State Department Definition of antisemitism, adopted on June 8, 2010, is virtually identical. Global Affairs Canada also recognizes the IHRA definition.6 On June 4, 2019, Secretary General of the Organization for American States, Luis Almagro, voiced his support for the IHRA definition and its adoption by the OAS.7

The IHRA working definition clearly articulates what is and what is not antisemitism, as well as how to distinguish between legitimate criticism of Israel and antisemitism. We urge the Special Rapporteur to use the IHRA definition as the fundamental benchmark in his report.

We also urge all UN frameworks to adopt and implement this working definition. Unfortunately, far too many UN agencies and officials frequently violate its principles.

Topics in this Submission

Key Issues in this Submission

NGOs in this Submission

Funders in this Submission