How would you describe someone who infiltrated Israel from Lebanon by sea armed with Kalashnikov rifles, RPG light mortars, and high explosives, murdered a nature photographer on the beach, next opened fire on passing cars on a coastal highway, carjacked a taxi and slaughtered its occupants, and then hijacked two city buses–massacring in cold blood 38 passengers, including 13 children, and injuring 71? A mass murderer? A terrorist?

Furthermore, in June 2017, PNGO condemned the Norwegian government for demanding the return of funding that was used for a youth center named after Dalal Mughrabi, who was among the perpetrators of the Coastal Road Massacre in 1978.

PNGO further glorified Mughrabi by labelling her a “Palestinian Woman Freedom Fighter” and calling Norway’s censure as “another form of foreign domination and oppression calling Palestinian resistance a terrorist resistance against Israeli occupation.” PNGO then absurdly claims that “No one in Burqa or in the Palestinian society glorifies terrorism and or terrorist attacks; there is a difference between freedom fighters and terrorists.” (emphasis added).

The Norwegian government provided funding to PNGO and 10 partner organizations via its partnership with Norwegian People’s Aid (NPA). NPA is currently receiving NOK 50 million (2016-2019, approximately $5.8 million) for its “Partnership for democratic development in Palestine” project.1

In addition to Norwegian funding, PNGO also received a grant in 2011-2016 from the German Society for International Cooperation- GIZ (Germany) for a project titled “Strengthening Civil Society in the Palestinian Territories.” In 2015-2016, PNGO received a grant of $30,000 from the NGO Development Center (NDC), which received $500,000 (2013-2015) from the European Union for “Strengthening the Palestinian NGO Sector Capacity and Involvement in Governance and Democratic Processes.” The project was implemented by PNGO and other Palestinian NGO networks. 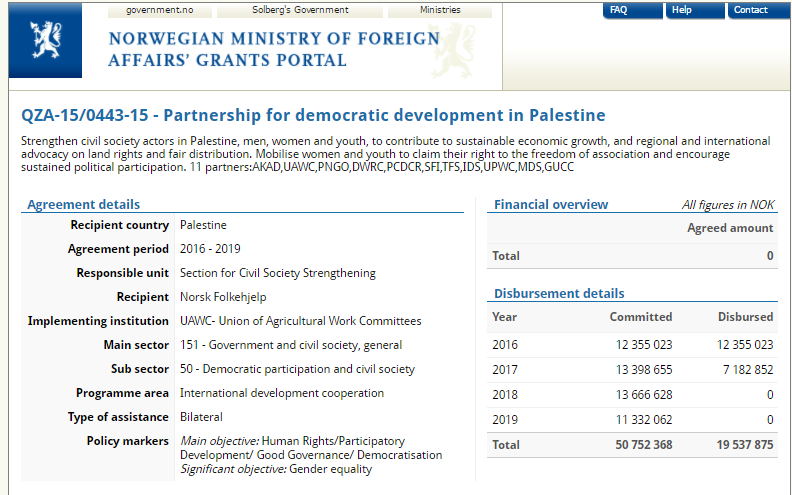 This is not the first time that PNGO has issued highly troubling statements about terrorism. In 2015, PNGO protested USAID funding guidelines, arguing that “any political party in Palestine is considered as a terrorist organization, whether it is Hamas, FPLP, DFLP, or even President Mahmoud Abbas’ Fatah party. Signing a contract with the USAID means that you cannot work with any organization which has even one member of its board of directors affiliated to one of these parties.”

PNGO is also a member of the Palestinian BDS National Committee.