On March 27, 2020, the UN Office for the Coordination of Humanitarian Affairs (OCHA), in cooperation with the World Health Organization (WHO), announced the “oPt Inter-Agency Response Plan for COVID-19.” OCHA requested $34 million on behalf of numerous UN agencies1 as well as local and international non-governmental organizations (NGOs) for use in the West Bank and Gaza. This number was raised to $42 million in late-April.2

In its fundraising efforts, OCHA stated that additional resources were needed to “respond to the public health needs and immediate humanitarian consequences of the pandemic in the West Bank, including East Jerusalem, and the Gaza Strip” (emphasis added).

However, many of the activities being attributed to the Plan – as detailed in periodic “Situation Report” updates from OCHA and discussed below – do not appear to involve vital, lifesaving resources and supplies “to implement the most urgent and critical activities.” In some instances, it is clear that existing NGO advocacy ventures, which often involve anti-Israel rhetoric and agendas, have been relabeled “COVID-19,” without a substantive contribution to emergency humanitarian aid. Furthermore, some of the descriptions of NGO activity indicate low- or no-cost efforts, and/or tasks that had already been performed – although there is no information about how much money the NGOs were receiving.

This suggests that key factors for OCHA are the goals of procuring funds for their NGO allies and “padding the stats” – not providing critical humanitarian materials in the most efficient and professional manner possible. Similarly, the listing of independent donations from “outside the Response Plan” (see “Donor Governments” below) and NGO activities that were not part of the original strategic document reflect OCHA’s attempt to take credit for others’ work and inflate its importance and centrality.

Moreover, the call for “emergency” funds comes after OCHA, other UN and development agencies, and their NGO partners have spent millions on anti-Israel advocacy agendas. For years, detailed analysis shows that these groups have prioritized targeting Israel over humanitarian aid, including through official UN partnerships with the Palestinian Authority (i.e. UNDAF). The COVID-19 crisis is exposing how wasteful and counterproductive this approach has been.

In its Situation Reports, OCHA provides varying details about donations for humanitarian aid, reflecting a manipulation of data to create the illusion of robust fundraising and implementation of the Response Plan. In reality, OCHA was taking credit for funding and projects not under its aegis.

It is also unclear whether donors can exercise adequate supervision over the spending, in particular since a number of PFLP-linked NGOs are involved and the UN does not respect the donor governments’ restricted terror lists. Officials from UNICEF,4 one of the Response Plan’s implementing partners, thanked donors for their provision of “flexible funds” (see tweets from UNICEF’s Special Representative in Israel, the West Bank, and Gaza and UNICEF’s Executive Director). OCHA also refers to “the reprogramming of funds previously allocated or pledged for other interventions” (see below for more details). Both terms suggest willingness by at least some of the donor governments to forgo necessary safeguards, due diligence, accountability, and oversight during a crisis.

According to OCHA, as of May 11, $21.2 million has been raised for activities within the response plan, and a total of $37.9 million for all “COVID-related response activities in the oPt.” Overall, the largest donors to the COVID-19 response in the West Bank and Gaza are Kuwait, EU (ECHO), Canada, the UK (DFID), Sweden, Ireland, Norway, and Spain (AECID). 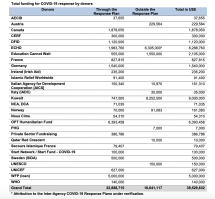 As seen in this table, the majority of funding is for activities “outside the Response Plan” – meaning not connected to the COVID-19 plan coordinated by OCHA – and not from new commitments, but rather from “the reprogramming of funds previously allocated or pledged for other interventions.” Earlier iterations of OCHA’s data only distinguished between “new” and “reprogrammed” (apparently from donor contributions to the region but for alternate projects) money. However, the language was altered in the April 14-20 report, where funding was separated into categories called “through the response plan” and “outside the response plan.”5 These changes are not noted as corrections after donors flagged OCHA’s claims, but are instead construed as “more detailed information from donors and recipient organizations.”

In implementing its COVID-19 emergency response plan, OCHA is working with numerous local partners – international, Israeli, and Palestinian NGOs that are supposedly tasked with carrying out projects related to combating the spread of the virus. As a whole, many of the activities appear to be tangentially related to the COVID-19 emergency, and others are not humanitarian at all. The following is a selection of such NGO activities; the OCHA website includes countless more examples.

In sharp contrast to the humanitarian principles of humanity, neutrality, impartiality, and independence, OCHA partners with a number of organizations that have ties to internationally designated terrorist organizations, some of which have staff members that have been involved in deadly attacks. Financial support to these groups results in increased risk for aid diversion.

Both HWC and UHWC are listed as working within the “Health and Nutrition Cluster” on projects related to stopping “further transmission of COVID-19 in the oPt,” providing “adequate care for patients affected by COVID-19…their families and close contacts,” and “mitigat[ing] the impact of the epidemic.” The April 13 OCHA Situation Report mentions HWC and UHWC in at least four projects working on “Establishment of medical triage areas for suspected cases of COVID-19,” training staff “on the provision of basic emotional and practical support to affected people,” providing “Equipment of an intensive care unit room,” and the printing of awareness materials.

Funding to NGOs that Promote Violence, Anti-Normalization, and/or Hatred

As is often the case with OCHA funding requests, counter-productive political projects are part of the “Protection Cluster” component of the appeal. OCHA explains that, in the context of combatting COVID-19, protection is supposed to be primarily focused on training to ensure accurate detection and referral of patients who suffer from Gender Based Violence (GBV) and psychosocial assistance due to GBV. However, the projects being implemented depart from this mandate, with many involving anti-Israel advocacy.

Within the Health Cluster, a number of the projects are being implemented with highly inappropriate NGO partners, and many of the projects themselves are mundane and unrelated to vital aid.

Some of the OCHA funding is for mundane activities, such as printing materials and sending messages. In principle, these activities are not inherently objectionable and may make a contribution on some level to outbreak prevention.

However, the involvement of international humanitarian NGOs in such efforts raises a number of questions: Why, if there is an acute medical crisis, are international groups with real expertise relegated to negligible tasks? If there are scarce resources requiring the raising of emergency funds, why are these activities even included? Why are massive, wealthy NGOs apparently receiving funds for them? And how are international groups necessary in this context, when there are local authorities and a plethora of local NGOs?

These activities suggest that, for OCHA, it is more important to maintain the relevance of NGOs and keep them in business than to use available resources efficiently.

To OCHA and WHO:

Exploiting the Coronavirus for Anti-Israel Campaigns

The news cycle has been dominated by COVID-19, and a number of advocacy NGOs have made statements linking their agendas to this issue.

The COVID-19 global pandemic has become another opportunity for non-governmental organizations (NGOs) to demonize Israel over its Gaza policy.