A comprehensive guide to the Durban Review Conference. With background, analysis, and information on NGOs that are expected to participate in the April 2009 event.

I. Introduction: the role of NGOs in Durban and the “Durban strategy”

For an overview of the first Durban conference and the NGO Forum, see: 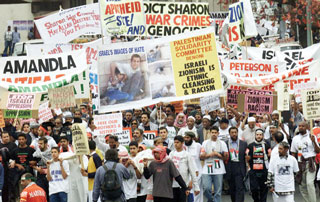 On April 20-24, 2009, in Geneva, Switzerland, the United Nations will host the “Durban Review Conference,” (Durban 2) – a follow-up to the 2001 UN World Conference against Racism, Racial Discrimination, Xenophobia, and Related Intolerance (WCAR). As mandated by the UN General Assembly, the Human Rights Council of the United Nations (UNHRC) is responsible for organizing and convening the event “towards the effective and comprehensive implementation” of the conclusions and recommendations of WCAR, and to continue the “global drive for the total elimination of racism.”

The first Durban conference became an instrument for racism itself, particularly directed against Israel. This agenda was driven by Iran and a number of Arab states, and primarily by the participants in the antisemitic NGO (non-governmental organization) Forum. The final declaration of the NGO Forum – which labeled Israeli counter-terrorism measures as “war crimes,” revived the “Zionism is racism” slogan, and introduced the “Durban Strategy” of isolating Israel internationally, following the model of the campaign against apartheid in South Africa.

This Durban strategy, led by NGOs, is behind the BDS (boycotts, divestment and sanctions) efforts, which are justified using the rhetoric of human rights, to demonize and delegitimize Israel.

A campaign for an NGO Forum at the Durban Review Conference has been launched at the UN, including a 30-NGO meeting organized by Interfaith International and the NGO Committee Against Racism on April 28, 2008. Representatives from the Office of the High Commissioner for Human Rights also attended. During the October PrepCom, a number of NGO delegates met separately on three occasions to debate the NGO Forum. On October 16th, “a group of NGOs, misleadingly presenting itself as the NGO Committee on Racism” (a subcommittee of CONGO – the Conference of NGOs in Consultative Relationship with the UN), held a session, chaired by Charles Graves of Interfaith International — an NGO active in the first Durban conference and identified with comments justifying suicide bombings in the context of the “occupation.” Claiming that the UN would provide them with facilities, some of the NGOs appointed regional coordinating committees to advance the prospects of an NGO Forum.

In May 2008, these NGOs published a letter to the Preparatory Committee expressing a “strong desire” for another NGO Forum at the Review Conference, and describing the NGO Forum at the Durban 2001 conference as “an important catalyst for many victim groups to come together, network, interact and build support for the work against racism and discrimination.”

Funding for an NGO Forum could come from “substantial funds” leftover from the 2001 NGO Forum. Already, the Office of the High Commissioner for Human Rights has offered travel support to NGO representatives to attend the April Review Conference.

During the January Intersessional (January 19-23 2009), the head of the Human Rights Treaties branch of the OHCHR, Ibrahim Salama, discussed the financial difficulties facing the conference and the need for additional funds.  He explained that the budget will cover basic costs, but more funding is needed for, among other things, “empowerment and participation of NGOs.”  Despite the concern for sufficient funding, UN Watch reported that an NGO Forum is still a possibility – NGO funding guidelines have already been drafted, and a committee has been formed to evaluate NGO applications. The OHCHR is also continuing to “encourag[e] NGOs to participate actively in the Review Conference and its preparatory process.”

II. Accreditation of NGOs for the Durban Review Conference 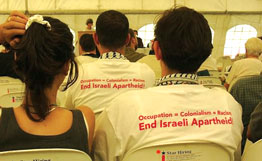 NGOs with UN Department of Economic and Social Affairs (ECOSOC) consultative status, and those that acquire specific accreditation for the Durban Review Conference, are invited to attend preparatory meetings and the Geneva conference. Additionally, as the conference in April 2009 is a follow-up to Durban, all NGOs previously accredited for the original conference, including those that organized and participated in the vehemently antisemitic rhetoric and events, are automatically permitted to attend the Review. The deadline for specific accreditation for Durban 2 was extended to February 10, 2009.

The accreditation process can be highly political, anti-Israel, and questionable on human rights – Libya chairs the Preparatory Committee (PrepCom), and Iran, Cuba, and Pakistan are also on the committee. For instance, in the May 2008 PrepCom meeting, a radical NGO known as the Palestinian Grassroots Anti-apartheid Wall Campaign (PGAAWC) was given immediate accreditation, while Iran blocked the participation of the Canadian Council for Israel and Jewish Advocacy (CCIJA).

Movement against Racism and for Friendship among Peoples (France)

– Law in the Service of Man

B’Tselem: The Israel Information Center for Monitoring Human Rights in the Occupied Territories

Canadians for a Genocide Museum

LAW: The Palestinian Society for the Protection of Human Rights and the Environment (no longer active)

SIKKUY: The Association for the Advancement of Civic Equality

Other NGO Statements on the Durban Review Conference:

Jacob Blaustein Institute for the Advancement of Human Rights

United Nations Association of the United States of America

A coalition of human rights NGOs is organizing an event called the Geneva Summit to be held immediately before the Durban Review Conference.  A full-day conference to be held on April 19, 2009, the event is designed to “place the most pressing situations on the world agenda” by “promoting universal human rights through the eradication of discrimination, intolerance and persecution.”  Prominent human rights activists and dissidents are among the speakers, and coalition members include groups such as Freedom House and UN Watch and other “human rights, anti-racism and pro-democracy” groups.

Organization of side events during the Durban Review Conference, UNHRC

IV. Office of the High Commissioner for Human Rights

The UN selected the Human Rights Council as the main body responsible for “monitoring the implementation of the Durban Declaration” and “to undertake preparations for this event.” In August 2007, Libya was elected chair of the preparatory committee. Cuba is the committee’s rapporteur, and Iran is an executive member. Other members of the UN Human Rights Council can be found here.

The High Commissioner for Human Rights, Navanethem Pillay, will preside over the conference. She has been actively attempting to convince all governments to participate in the Durban Review Conference.

In her October 6, 2008 speech, High Commissioner for Human Rights Navanethem Pillay acknowledged the antisemitism of the 2001 NGO Forum, while minimizing its implications:
Seven years ago at the 2001 World Conference against Racism, the virulent anti-Semitic behaviour of a few non-governmental organizations on the sidelines of the Durban Conference overshadowed the critically important work of the Conference. Measures were taken to address this betrayal of the core principles of the Durban Conference, and the NGO document was not forwarded to the Conference.

On October 14, 2008, NGO Monitor sent an open letter to UN High Commissioner for Human Rights Navi Pillay and UN Secretary General Ban Ki-Moon calling on them to “avoid providing official sponsorship or funding for another NGO Forum that is likely to be a venue used to promote hatred and antisemitism” and “would further undermine universal human rights principles in the framework of the 2009 Review Conference.”

In his December 12, 2008 article, “Distortions plague anti-racism conference,” Rupert Colville, Spokesperson of the Office of the UN High Commissioner for Human Rights writes “The purpose of this Durban Review Conference (sometimes misleadingly referred to as ‘Durban II’) is to examine the implementation of the outcome document of the World Conference against Racism which took place in Durban, South Africa, in 2001. Unfortunately both newspapers replay a number of factual distortions which have become increasingly widespread on the internet over the past year, including numerous references to the review conference as an anti-Semitic ‘hate-fest’.”

On December 16, 2008, Navanethem Pillay, United Nations High Commissioner for Human Rights, published an article in Ha´aretz entitled “The anti-racism debate.” In it, she claims that “The Durban review conference is a timely opportunity to reaffirm the principles of non-discrimination and to build on the Durban Declaration and Program of Action. It is for states to ensure that this objective is met and implementation gaps are closed. If all states are not engaged in the process, this goal may remain elusive. Thus, the concerns expressed by Canada and Israel that the review conference will become a platform for denigrating Israel must be assuaged. Seven years ago, states did so by elevating the conference´s outcome above the hatred and hostility that took place on its periphery, and by reaching a broad agreement on the necessary measures to combat racism and intolerance. They must achieve that commonality of purpose again through active engagement rather than withdrawal.”

NGO Monitor has contacted the embassies of EU-member states, as well as Switzerland and Norway, requesting information on their policy towards the UN Durban Review Conference scheduled for 2009. Specifically, NGO Monitor asked whether these governments had defined principles required of NGO grant-recipients regarding participation in the Durban Review Conference, and what lessons were learned from 2001. (responses below)

Various governments have already made public statements expressing their concern over the Review Conference: