See here for complete PDF version of this report.

Please note: All donors, names of NGOs, grants amounts, and projects are taken directly from the official website of the Israeli Registrar of Non-Profits (Rasham Ha-Amutot) (unless stated otherwise).

The Israeli “Law on Disclosure Requirements For [Groups] Supported by a Foreign Governmental Body” (NGO Transparency Law – February 2011) provides an appropriate and timely framework to inform the Israeli public about foreign government involvement in Israeli political issues. As implemented by the Israeli Ministry of Justice, the law is an international model for transparency.

The law requires that a “recipient of support that received a donation from a Foreign Governmental Body will submit to the Registrar, within a week of the end of the quarter in which the donation was received, a report in an online form which the Minister of Justice will formulate.” Various NGOs have implemented these regulations, in full or in part, since the beginning of 2012. This has allowed the Israeli public to identify donors, funding amounts received, and the nature of the projects implemented by NGOs. However, as NGO Monitor analysis has shown in previous years (2012-2013), some NGOs fail to submit reports, as required by law. This indicates the necessity of stronger enforcement by the Ministry of Justice and the Registrar of Non-Profits (the Registrar).

The following analysis presents the data from NGO quarterly reports, highlighting those involved in the Arab-Israeli conflict. The analysis includes a discussion on the effectiveness of the law, its limitations (especially regarding enforcement), and its role in promoting transparency and accountability as democratic values in Israel.

The Registrar of Non-Profits website contains reports from 75 NGOs (non-profit associations and companies for the public benefit), dealing with a wide variety of issues and agendas, for a total sum of 176,147,446 NIS in the years 2012-2014 (see Appendix I).

These NGOs can be categorized according to the nature of their activities:

1. Political NGOs involved in polarizing activity and advocacy in the context of the Arab-Israeli conflict. These include groups that are directly or indirectly active in BDS (boycott, divestment, and sanctions) campaigns, lawfare, delegitimization, demonization, and lobbying against the state of Israel, including involvement in the Goldstone report, the UN fact-finding commission on the Gaza War (2014- “Schabas” commission), and campaigns concerning the International Criminal Court (ICC).

2. NGOs dealing with other dimensions of the Arab-Israeli conflict, the majority of their activities aimed at cooperation and co-existence.

3. Other Non-Profits working on various issues in Israeli society.

Limitations of the Transparency Law

Twenty-four NGOs reported in part or in full to the Registrar between 2012 and 2014. In order to identify other political NGOs that did not fully report foreign funding to Registrar, the following analysis (Table B) shows the reporting status of 31 NGOs that have previously received foreign government funding, as reported by the NGO or the government entity.

See here for table of all grants. 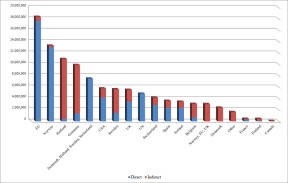