During the current holiday season, NGOs exploit religious sources and biblical verses as part of their political warfare against Israel. The traditional Christian themes are introduced into a simplistic, one-sided narrative of the conflict that omits terrorism, Hamas control of Gaza, and Israel’s basic security needs to protect its civilian population.

Kairos Palestine is a campaign to promote the 2009 Kairos Palestine document, drafted by a small group of Palestinian Christian clergy. It calls for BDS (boycotts, divestment, and sanctions) against Israel and denies the Jewish religious and historical connection to any part of the Land of Israel.  The Kairos Palestine document also ignores more than fifty years of Jewish-Christian reconciliation and denies the legitimacy of Judaism, particularly by arguing that Judaism was superseded by Jesus and Christianity (replacement theology).

With these theological underpinnings, the 2014 Christmas booklet distributed by Kairos Palestine encourages religiously motivated campaigns against Israel, including regarding Palestinian prisoners:

Holy Land Trust makes similar claims in its Christmas message, “…accompanied the birth of the Prince of Peace. Looking at it in the context of the situation in Bethlehem then – which is not so much different politically and socially than Bethlehem today – I believe the lesson is in the roles that the characters played in the stories and not their persona and titles. It is not about angels, shepherds and wise men as much as it is about the messengers, the witnesses, the supporters, and the activists.” [emphasis added]

Wi’am, “a grassroots organization” that is involved in BDS, supports the Kairos Palestine document, and often distorts the context of terror, produced “A Word from Wi’am: Christmas is a message of Hope and Defiance,” stating that Israel acts as a “tyranny” comparable to the Romans. Falling back on teachings of contempt against Jews and Judaism, it refers to a “tribal god of retaliation”:

Pax Christi USA is conducting a letter writing campaign to “Call on Congress to support an end to Israel’s occupation.” Pax Christi states that justice will be served this Christmas if you “Contact your elected officials to underscore the call for help in Gaza in the Dec. 15 letter.”

The UK-based Palestine Solidarity Campaign is conducting a BDS initiative “Don’t buy Hewlett Packard this Christmas!” because “HP is contracted by the Israeli government to provide the IT infrastructure to the Israeli navy, whose gunboats pounded the Gaza coast during the summer’s massacre.”

Again this year, Kairos Palestine (see above) published a 60-page “Christmas Alert 2014” pamphlet, slated as an educational hub for religious groups and gatherings. This pamphlet serves as a vehicle for anti-Israel holiday messages for NGOs and churches, including the Alternative Information Center, the World Council of Churches (via PIEF and EAPPI), and Church of Sweden. Examples of demonization: 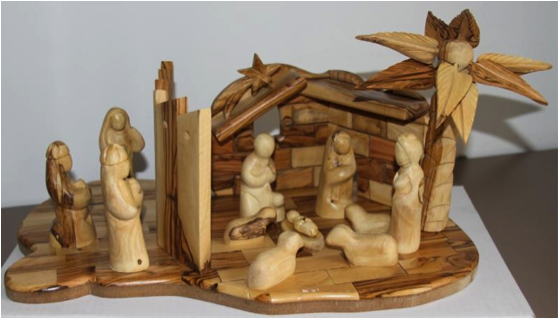